Am I allowed to stare, or supposed to?

Today, in the course of doing my job, I met with someone who, aside from the modern rain jacket, looked like he had stepped out of the 1890s.

Round, wire-framed glasses. A bow tie. (Yes, a bow tie. Not cool unless you are 70, or Dr. Who.) And a moustache that twirled into curlicues on the end. (Note: this is the first time in my life I have written/typed the word "curlicue.") 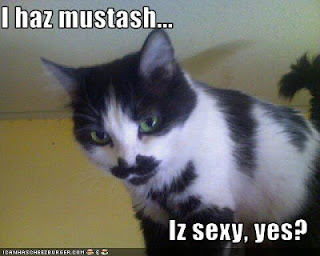 OK, you're thinking he might just be a hipster (he was in his early 20s, is my guess.)

"And now, we will go to the aforementioned meeting space."

He used the word "aforementioned" in the next sentence, too. Mind you, nothing was actually aforementioned. I booked the room over email. Afore-typed? Afore-emailed?

Trying to make small talk, because he was otherwise dead silent, I asked him if he had always been in this line of work.

"I had other positions before this, but nothing consequential."

What the fuck? I wanted to look at him and say, "Who the hell TALKS THAT WAY?"

More than anything, I wanted to know what he used to hold the curlicues in place.

Do they make moustache wax these days? Inquiring minds want to know.

I told the volunteer at work about it. She said years ago, she was working with someone who changed his hair color every week to a different hue of neon. Once, she asked him precisely what shade he used.

"I wouldn't do it if I didn't want people to notice it," he replied.

Which makes me wonder. Was I allowed to stare at the barbershop quartet moustache?

Or was I supposed to?

Would you have said anything?
Posted by Riot Kitty at 6:11 PM

I think bow ties are dead sexy. Seriously. I would have wanted to have my way with him. Undo that bow tie if you know what I mean. ;-)

Come on be nice. He's just making his way north to the Klondike.

Oh yeah, I would've given him the third degree.

And incidentally, I do believe that fine purveyors of gentlemen's requisites still manufacture the aforementioned moustachio wax.

Oddly, I am just thinking about what it would be like to kiss this guy. Yeah, I'm weird like that.

I definitely would have asked. If he got pissed off it would have confirmed that he was a pretentious ass.

If he went into great detail about how he did it, same thing.

Definitely Ask! It is kind of interesting---I thnk "hndlebars" are back in vogue! my former omputer guy who moved out of California, had a wonderful Handlebar...He was not a kid..And he looked quite dapper!
It would be interesting to know why this young man was partial to this type of 'stashe'? And they definitely do make the wax needed to tame it...!
The way you describe this young man he does sound like kind of a jerk.

One of my good friends said she is starting to stare and enjoys it. I have tried but my parents voices keep haunting me with "It's not polite to stare". I believe I shall continue to try mastering the art.

Ron is growing quite a nice beard and mustache through his illness and ask me to get him some mustache wax the other day. When I inquired at Walmart the lady "stared" at me in astonishment and declared, "We stopped carrying that (meaning the aforementioned) years ago!"

It does make one wonder if he is putting on an act of some sort. He sounds awfully pretentious to me. I probably wouldn't have asked because that might be what he wanted. :)

I am totally supportive of you staring...he sounds like a f******
weirdo. Had you told us that he was 89 years old, I'd say that sounds cute....but WTF is a young guy wearing a handlebar mustache for? And what's with the pretentiousness?
As I have no shame, I would have been asking him questions?

I probably would have done just what you've done. Enjoy it and write a blog post about it! Maybe he was a time traveler.

Maybe he was a Doctor Who fan? I would have commented on the bow tie.

When people talk to me that are very posh and pretentious it never lasts long because I have no friggin idea what they are talking about.

It would be wise if thou were to endeavor to emulate the fastidious care with which he prepareth his appearance whilst striving to match it with thine own sartorial choices. Perhaps something in a sequined bodice with a parasol for protection from the harsh light of the sun.

Birdie: Hold your thoughts until you meet him!
WIGSF: That's a possibility I hadn't considered.
Debra: They do! Mr. RK found out. We even have a company here in Oregon.
MC: Refer to my comment to Birdie ;)
DW: I probably would have, if it wouldn't have been an on-the-job moment.
OLOTH: The thing was, it wasn't full enough to be a handlebar. It was thin and twisty. Unwaxed, he probably resembles the Lorax.
GA: Apparently we have the aforementioned here in my own state! Shall I get some for Ron? :)
My parents also taught me not to stare, which I still try to practice, even though where I live, I think a lot of people want us to stare.
L: I also considered that last part! Maybe he wanted to wax poetic (no pun intended.)
Cheryl: Exactly. He missed the mark by about 60 years.
Charles: Like Dr. Who :)
Joey: Luckily I didn't have to talk to him for long, because I would have fallen asleep.
Darth: How verye quainte :)

As a guy who tends to have facial hair I would definitely have talked about it!

As for people who talk like that, I haven't met one yet and that is surprising given that I work at a uni!

I had a high school teacher back in the days when gas was $1 who had a mustache like that. Cool guy.

Also got a co-worker who has a mustache like that.

Ugh! What a pretentious set of phrasings! Kudos on your curlicuing!

RC: I'm surprised, too.
GB: Did they talk about the moustaches in the aforementioned manner?
C: Haha! Thank you :)

I couldn't have lived with myself if I didn't say anything. Damn hipsters. They're really going overboard now, aren't they? As a guy with a fairly large vocabulary, I'd probably start speaking in his vernacular and see how long it took him to ascertain that I was mocking his speech...

IA: Yep.
ABFTS: I totally should have done that.

The co-worker, sometimes when he was ticked off about the powers that be he would talke like that.

definitely, he sounds like an odd person to me..
i'm thinking he's one of those people who like to draw attention.
i'd probably would have done just what you've done.

have a great weekend!
big hugs~

definitely, he sounds like an odd person to me..
i'm thinking he's one of those people who like to draw attention.
i'd probably would have done just what you've done.

have a great weekend!
big hugs~

In my opinion, though, the moustaches should shrink.