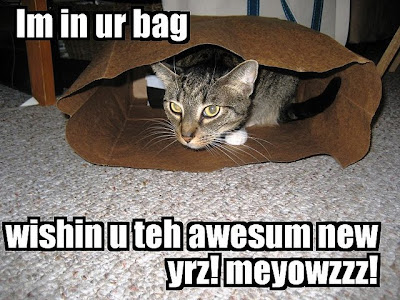 I have always felt that the antidote to obnoxious was a snappy comeback.

Mr. RK and I went out to dinner, then stopped at the grocery store to get movie snacks. I am not a big party person, and always stay in on New Year's Eve to avoid the drunk drivers anyhow.

So the guy who rang us up at the grocery store is kind of a creeper - he got a little too friendly one time when Mr. RK was not there - and when he finished ringing up our non-alcoholic purchases he said, "Well, it looks like you guys are going to have an exciting time tonight."

I replied, "Actually, I'm a nymphomaniac with my own brewery."

I stole that line from a BBC show called Coupling, that sadly only made four seasons...

Next time, include a return address 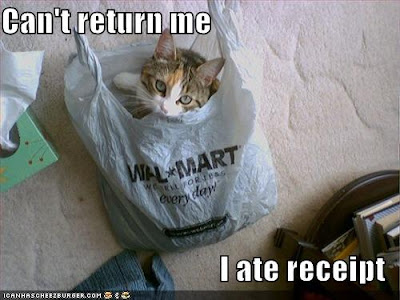 We got our first piece of hatemail from our annual appeal at work today.

Now occasionally we get a request to remove people from our mailing list, but this was a new one.

Based on what was written on the donation card, I'm guessing our hater was an adult during the 1970s:

"You don't care about people!"

"You're just as bad as (another nonprofit where people do a lot of work for relatively little money, and also provide services for free.)!"

And a few other insults, as well as:
"Take me off your list!"

Seriously, I needed that laugh today!

Speaking of being removed from lists (and laughing), I got this note - no joke - from one of our volunteers:

OK, nothing like what my friends on the East Coast are experiencing, but it's starting to snow about about an hour from here, which means it's possible that the entire metro area could be shut down by tomorrow. I know, it's ridiculous...

So if that happens, I plan on being somewhere in between Lucky and Earl Grey: 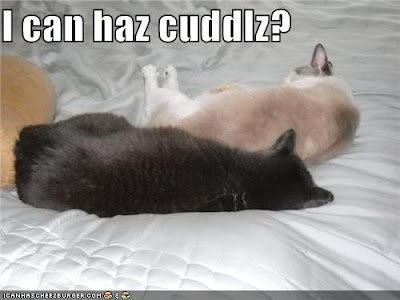 In the meantime, I HAVE to share this adorable video that Granny Annie linked to on her blog. If you can't see it, try the link.

And apropos of nothing except making you laugh 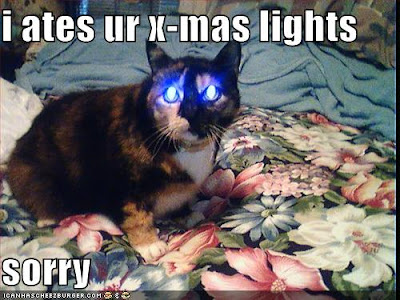 I was talking with a friend today about religion - she said she believes in God but not the hellfire and brimstone stuff. However, her brother does. She said years ago when she called to tell her family that she was divorcing her husband (who was apparently a real jerk), her brother said, "You should get down on your knees and pray for God's forgiveness."

Her reply (before slamming down the phone): "And YOU should go FUCK yourself!"

I laughed so hard I thought I'd pee my pants!

Then she said, "But he must have thought I was right, because later he helped me move to San Diego!"

On that note, Merry Christmas!
Posted by Riot Kitty at 4:28 PM 12 comments:

Tips for the uninitiated in a Lutheran church 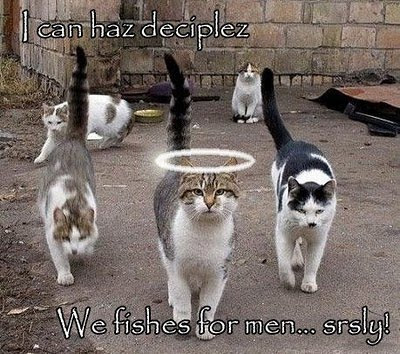 Thanks, everyone, for your kind thoughts, e-mails, calls and wishes...Grammy's funeral service was actually very nice.

That said, Mr. RK is my hero. A shy agnostic during the best times, he went through a very long day of meeting grieving people that he did not know, as well as a service that was a bit over the top at times.

I realized afterward that I should have given him a few words of advice about Lutheran churches. So just in case any of you happen to be unfamiliar with them, and end up in one in the near or far future, here you go.

1. Lutheran churches are cold. Always. Invariably. There aren't lots and lots of windows - are they cheap? Poorly insulated? Do they keep it cold on purpose, so you'll stay awake? Inquiring minds want to know.

2. The Lutheran church hasn't added a new hymn in about 300 years.

3. The old hymns don't sound so good. They're all in the same key, and if you can't sing in that key, God help you. Come to think of it, you'll be in the right place for that.

4. Lutherans believe in suffering. Unlike more enlightened denominations, Lutherans tend to believe that God sends you suffering as a trial and test of your faith. Consequently, everything bad that has ever happened to you, including disease and death, are "trials."

Personally, I don't buy into it, but be prepared for it when you hear them preach. (Maybe that's what they're doing with the cold churches?)

5. It's not OK to be gay. It is, however, OK to stay in the closet and reproduce and become a Lutheran pastor.

6. Pews are not made for comfort. Again, probably something to make you stay awake during all of that excitement with hymns.

7. Being trans is not OK, except for the kids in dresses, otherwise known as acolytes.

8. Lutheran church services are not supposed to be cheerful. In fact, I think smiling is forbidden. 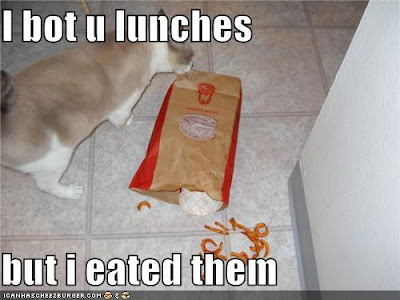 In times of intense stress - such as having a family member die and then having most of your extended family act like selfish assholes - I tend to burn a lot of calories.

I usually eat very healthy with a few treats thrown in. Needless to say, since my grandmother died, there have been more treats. I am still thinner than I was a month ago.

Anyhow - cats are carnivores, I am told, but I went on a junk food binge last week and Earl Grey started aggressively sniffing the curly fries. Think Snoopy sniffing in Lucy's rootbeer. I said aloud, "You can't possibly want one of those!"

He stared at me, hard.

I tore a fry into little pieces and he ate them!

Later on, Lucky (see picture above in the lolcat created by yours truly) actually went and dug the cold fries out of the bag and licked them. Yuck.

With my luck, I'll think of this picture during the most serious moment of my grandmother's funeral tomorrow and get stuck in the giggle loop.

I suppose worse things could happen.
Posted by Riot Kitty at 9:19 PM 13 comments:

There's a new version of hell 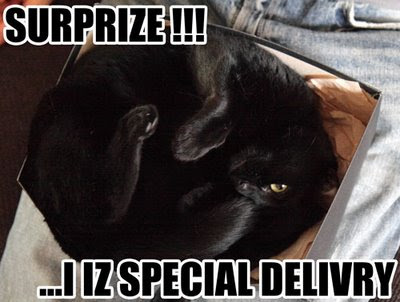 I thought my version of hell would be waking up and being stuck FOREVER in one of those mini-playgrounds at the mall where idiotic parents let their kids run rampant.

But I came up with what must be a tie...working at the post office during the month of December. Seriously, I think the taxpayers should buy every postal employee a big round of drinks come Dec. 31, for putting up with all of the bullshit I witnessed yesterday. I'm sure it was the same at post offices around the country. Portland is typically a polite city...and it was one long bitch session.

Now mind you, I am no fan of long lines. But when I had to go to the post office for work on Monday - the biggest shipping day of the year - I knew it would be a wait.

Apparently no one else thought about this.

There were two women next to me in line who kept harassing some poor guy who was just trying to help (by directing those who could go to the automated postal center, etc.) to the point where I finally said, "Will you stop abusing this man! It won't make the line move any faster! It's the holidays, the line is long, live with it."

They both got quiet and then reassured each other that they were not being rude. Meanwhile, he thanked me.

For next year, I'd like to offer some tips for the uninitiated:

1. If you go to the post office on the busiest shipping day of the year, there will be a line. A big one.

2. The line won't move any faster if you accuse people of taking excessive breaks, thus, in your opinion, causing the long wait.

3. The line won't move any faster if you verbally harass anyone walking by who happens to be wearing a postal uniform.

4. The line won't go any faster if you ask these same people, while gesturing violently at people passing in uniform, "Why can't HE help? Or SHE help? Doesn't s/he work here?"

5. The line won't go any faster if you keep whining and ask why it's taking so long. But I might throttle you.

6. If you have wrapped your package in wrapping paper, it won't ship that way.

8. If your package is fucking huge and heavy, it will cost you extra to send overnight or priority.

Random funny things from this week 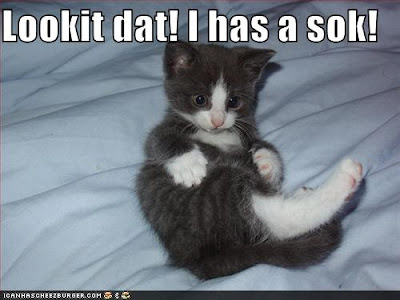 Working on our annual appeal at work, I found out we have a member named Harold Furry. And one named Forest Byrd.

A moment at Mr. RK's work. His boss has a voice that carries.
Boss to female employee: "So you got laid last night?"
Like a movie, everyone becomes silent.
Boss: "Hey, she looked happy!"

Funny but creepy - it's a first. I have never gotten hit on by someone delivering our water at work. How's this for a bad pickup line?
Guy: "Ooooooooh cookies! (Munching.)I bet your husband thinks you're the bomb because you make such good cookies!"
Me: "Yes, he does. He ate several of them last night."
Guy: "Uh. I bet you make good Christmas cookies, too?"
Before rubbing my velveteen shirt sleeve and saying, "Oooh, this reminds me of those red velvet seats they used to have in theaters!"
Where you probably jerked off also. OK, the funniest bit was that line in my head, wasn't it?

Seeing an e-mail that I sent a few of you about an angel who gets a tree shoved up its ass by a pissed-off Santa. A friend who volunteers e-mailed me in a separate e-mail and said, "See you tomorrow, my little angel!"

Stuffing condoms into holiday gift bags with several older volunteers, it suddenly turned into a hilarious hen house.
Woman #1: "If all of these get used, it really will be a happy holiday!"

Funny but sad (not to mention stupid): a county a few hours south of here spent $250K advertising that they were broke. No kidding.

My friend coming up with a great line about people whose IQs equal their shoe sizes. 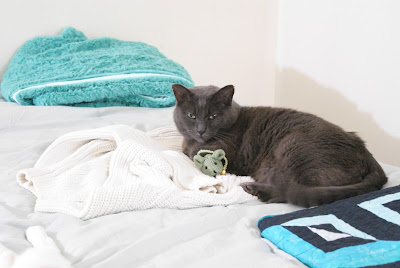 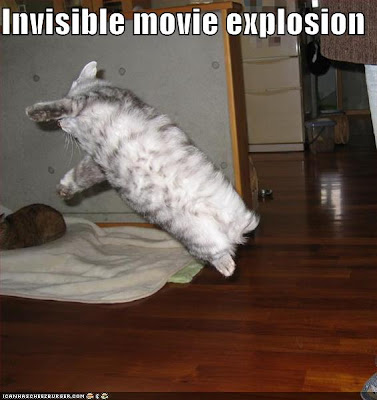 That's the sum of the movie Love and Other Drugs. It took me two full-price movie tickets, plus popcorn, and one hour and fifty three minutes of my life that I won't get back, to figure that out.

What I really want to know is...

Why does Anne Hathaway appear topless in so many scenes, but Jake Gyllenhal never goes full frontal?

Sexist double standard, I tell you.

So after about 3/4 of the movie is sex scene after sex scene, it becomes...wait for it...a chick flick!

Honestly, I'd have rather seen a dick flick.
Posted by Riot Kitty at 10:25 PM 18 comments: