A protest? I'll bring the goat, of course...

Pardon the long absence. I've been dealing with some stuff. Everyone is safe and sound, but moods (mine) have been in the tank. I promise I will visit your blogs soon!

On the plus side...there is always something to make us laugh.

There is a movement in Portlandia now that has some validity, IMHO - "Stop Demolishing Portland." Essentially residents want developers to stop building up lots, tearing down houses, and putting up monstrosities that ruin the local character and take up most of the greenspace.

So of course, if there's a protest about pulling down an old house, why not bring your pet goat? On a leash? And put it on top of a car? 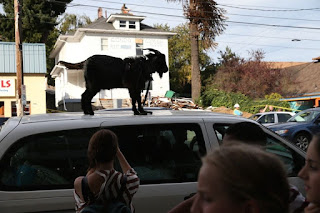 It should be noted that the site of the protest was not far from my office, which is now smack dab in the middle of marijuana sales central. Unrelated? I think not...

And what other city in America would have this as a news headline?

Well, never a dull moment here. How about you?

Just when I had some time to post, we had another mass shooting tragedy - this time three hours away.

These have become so common that we weren't flooded with messages from friends and family. Another day, another body count, another group of people jumping in with politics.

How to express how we feel? Raw. Hurt. Outraged.

I work in mental health advocacy and I live with major depression. After the initial shock of hearing what happened on the radio, we had to prepare for the inevitable media idiocy.

Please question your news agencies and the information that spreads like wildfire. The fact is that study after study has shown that people living with mental illness - like me - are much more likely to be the victims of violent crime, not the perpetrators of it. When we are the perpetrators, we are overwhelmingly more likely to harm ourselves. 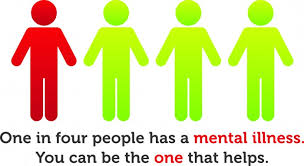 One of my friends said it very well: "When it's a white guy who is the perpetrator of something like this, they say it's mental illness. When it's someone of any other color, they say it's terrorism."

The definition of "mental illness" is a misnomer. The majority of the time, you won't know when someone is living with something in the DSM 5.

Someone you know - a family member, a coworker, a friend, a neighbor - lives with some type of mental illness. Does that change how you feel about them?

The same week, we had a conversation with a local high school that was producing a program called "Insanity." They had students dressing up in straightjackets and sold sweatshirts with the name of the high school that said "Psychiatric Hospital" after the name. They responded to our concerns very quickly, but it still stings that people mock and fear illness in your brain rather than illness anywhere else in your body.

We're not monsters. We're your friends, and neighbors, and right now, we are grieving. It would be nice to see some real data and real solutions offered up rather than fear mongering.

If you suspect someone you know is having mental health issues, be kind. Offer them support. It will be appreciated more than you think.
Posted by Riot Kitty at 12:32 PM 16 comments: