Just saying. When your little brother is visiting and you take him to the Columbia River Gorge, dress appropriately.

DO NOT under any circumstances hike more than a mile up to the top of a waterfall in sandals and a skirt so short it barely covers your ass.

So, can you guess what I did yesterday?

We hiked all the way to the top! Yes, that bit. 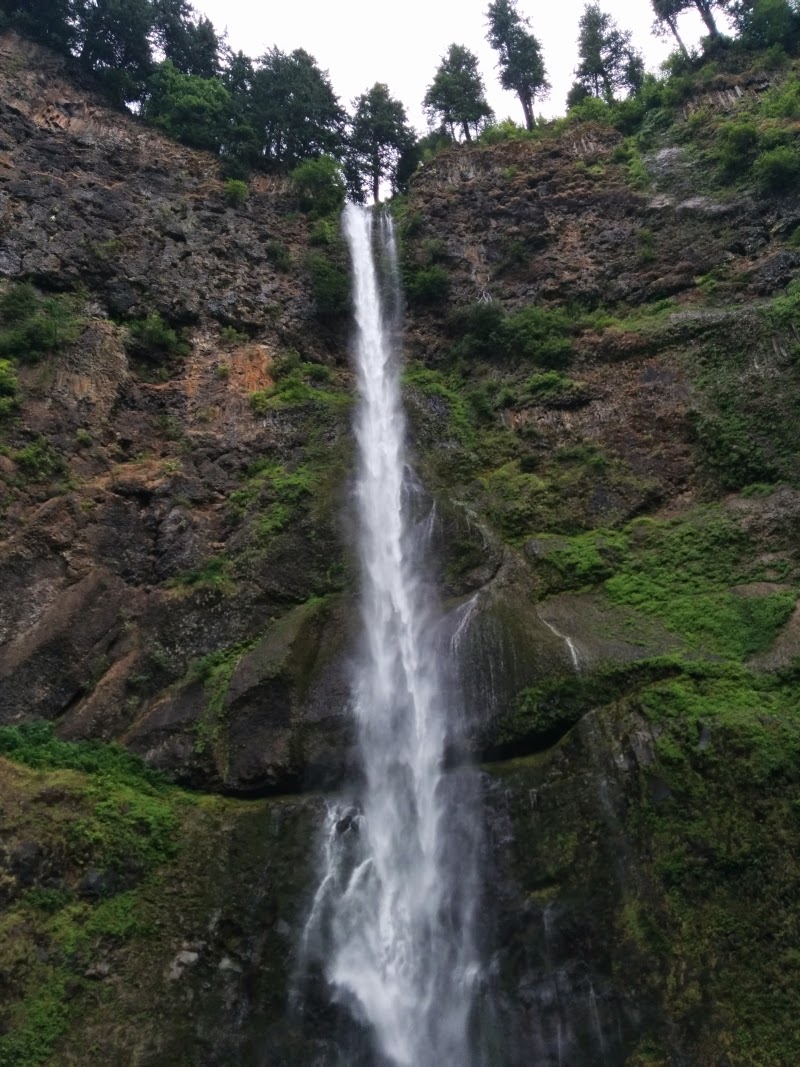 My bro was very patient as I kept trying to remember which bend we were turning around to reveal an amazing view. So we had several. Who the hell knows how we had signal up there. 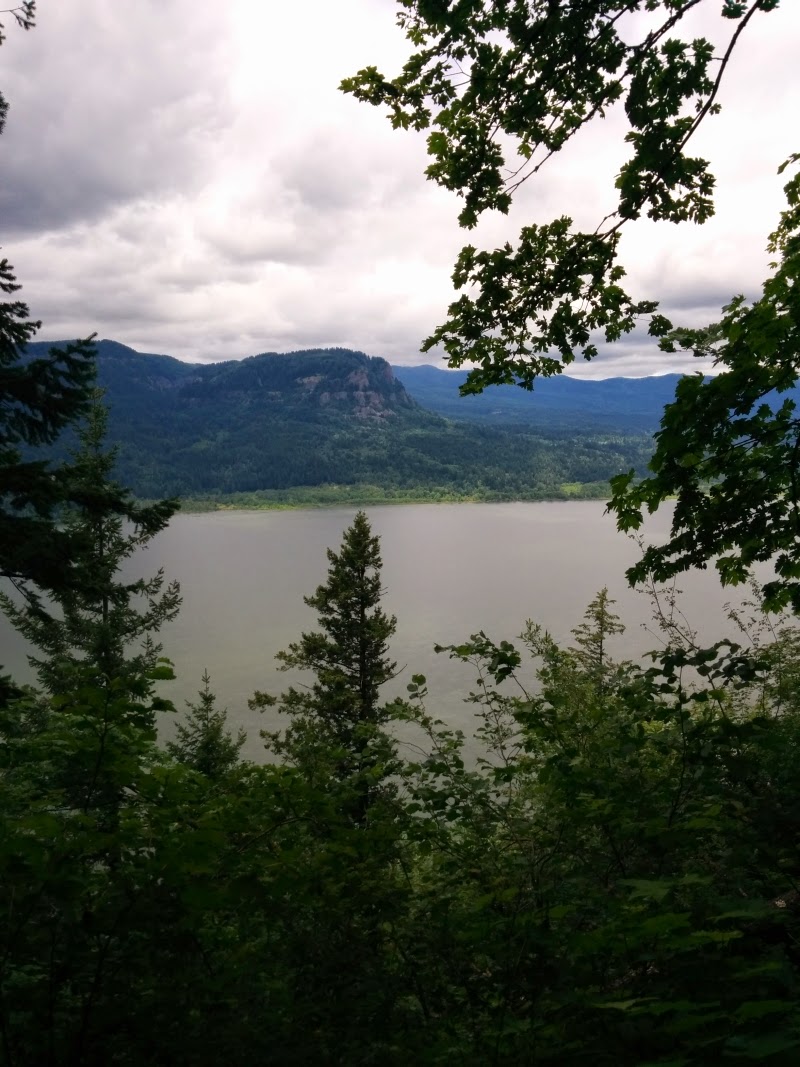 I really, really, REALLY wanted to turn back, wearing less-than-appropriate gear. But I kept seeing people much older than me, and some really out of shape people, coming down, so we kept going. Mind you, they probably all died right after they passed us, but we made it to the top. 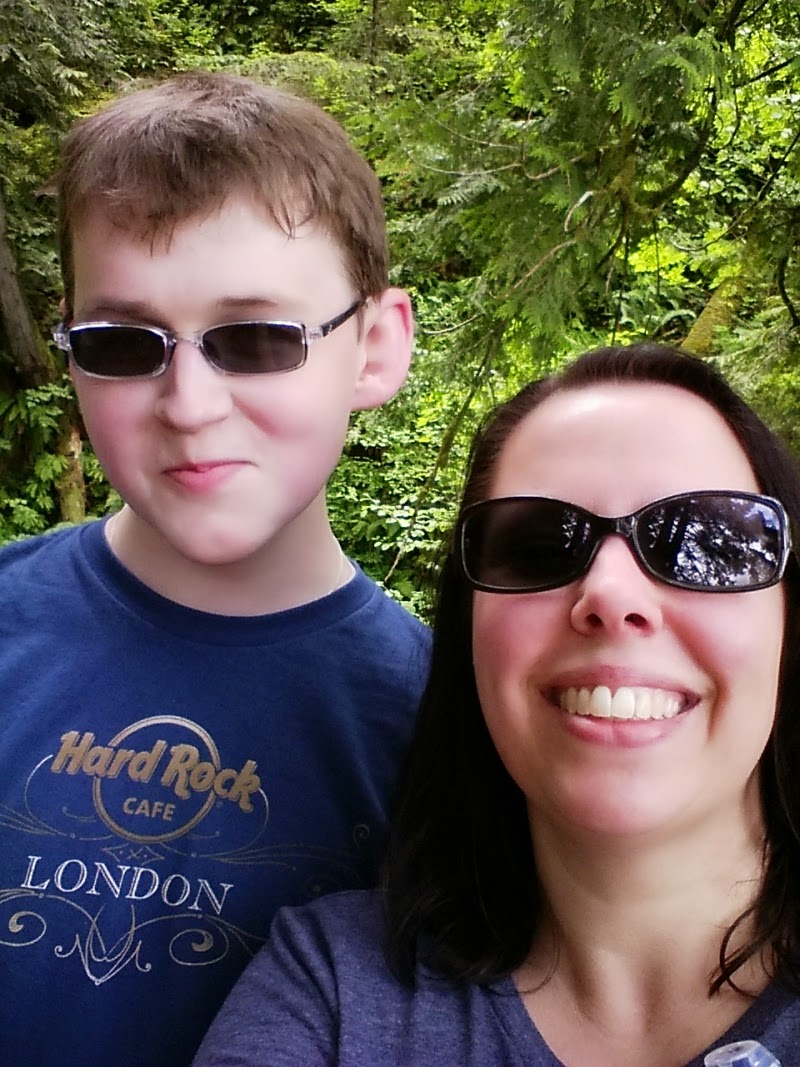 Not exactly a Kardashian selfie, because I don't feel the need to show my boobs with my family present. Call me particular. 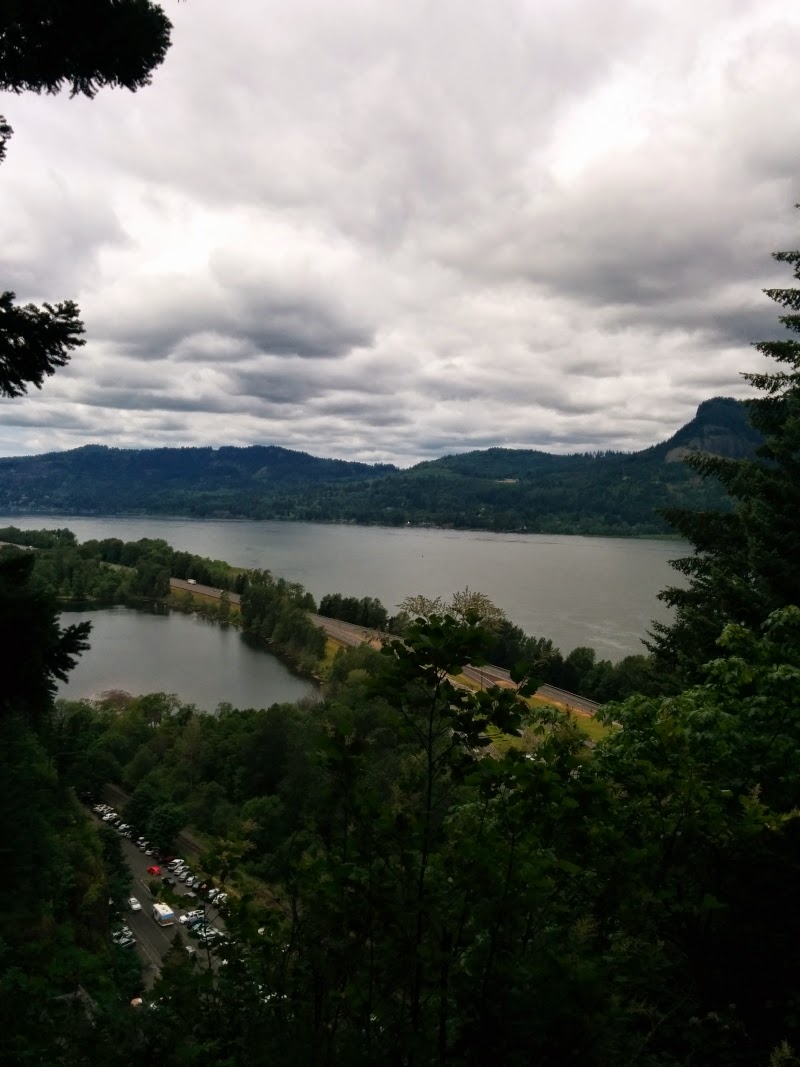 One more reminder of why it's helpful to have a red car. You can spot it even from 2,000 feet up!

I have to ask all of the parents out there - I'm not a parent myself, but I'm thinking it wasn't the brightest idea for some hikers to drag their three- and four-year-olds with them? You'd think you'd be save from screaming children at 5,000 feet, but...nope.

Again, I suppose, this was why velcro was invented. I should have checked the shoes.
Posted by Riot Kitty at 10:53 PM 23 comments:

I've thought several times about posting funny stuff or things to take my mind off of what was going on with you and my uncle, and then you realized it was OK to stop fighting the last of the cancer battle. You said you couldn't have made it the rest of the year. We knew this day was coming, but I still can't believe you won't be coming over for pasta, or that we won't be going out for coffee.

I remember meeting you my first week of work, more than six years ago. You spilled ice water at our luncheon - you talk about a (literal) icebreaker. We became friends, you and Mr. RK and your wife and me, almost instantly. 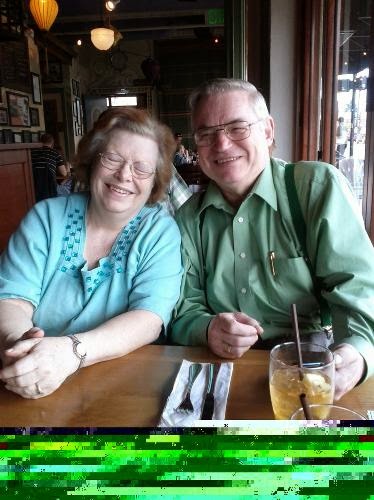 You told me that years before that, you had lost your son to bipolar disorder. You could have curled up and hidden away with your pain, and the world would have understood that - but you didn't. Instead, you spent thousands of hours educating people about this cause. You trained police officers and first responders. You spoke at events. You volunteered for organizations that seek to educate and de-stigmatize the judgement that surrounds mental illness. As a pastor, you brought in communities of faith to work with the nonprofits to do education.

You said, "God is too big to fit into one religion." You thought ice cream was the most important part of our biggest event!

I told you the last time I saw you that you had made a huge difference in the lives of many. I can only imagine what it was like recounting your family's story. You probably relived the pain every time you shared - but you did it in hopes that other people wouldn't have to go through the same pain.

Your son's picture was your phone's screen saver, 10 years after he died. A life unfinished.

I feel the same way about yours. You were only a couple of years older than my dad.

You were so funny. You never lost your sense of humor, despite the hard and terrible things you and your family had gone through. When you saw the Muppets movie with your granddaughter, you said it was "far-fetched." It took me a minute to get that.

You said you'd be a vegan, too, if animals weren't made out of meat.

You said you weren't afraid of dying, that you were looking forward to being reunited with your wife and son. You faced this terminal illness head on, wearing a button and a bracelet that said, "Pancreatic cancer sucks."

Indeed it does. It was hard to watch you at times when you were on the verge of giving up. It was harder to watch when the cancer took over.

I'm thankful that you aren't in pain anymore, but when this sinks in, I'll start to miss you.

I'm thankful that I had the privilege of being your friend.

Things are still rough for loved ones (yes, plural) - let's just say cancer sucks. Thank you for all of your kind wishes. Now, in attempt to cheer myself up, and any others who may just want to laugh, this post is for us.

Last night I went to a small event that was a fundraiser for an organization where I am on the board. Its mission overlaps with that of my organization, and I dragged 16 people I know through work to this event. It was nice to be informal and joke around (some helped by wine), and I found out two things I had in common with someone I know because of legislative stuff: 1. he is a preacher's kid like me, and 2. fuck is also his favorite word.

Don't ask me how this came up. But I got to show everyone pictures of a shirt that my dad designed and sent just for me! 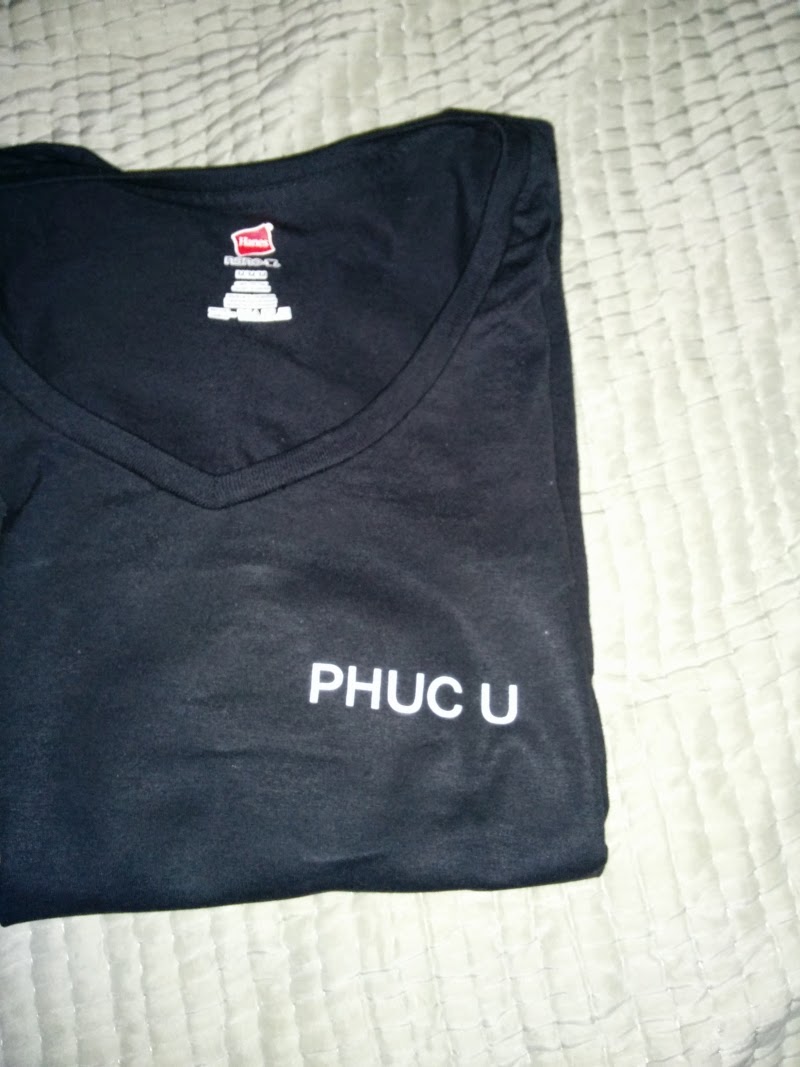 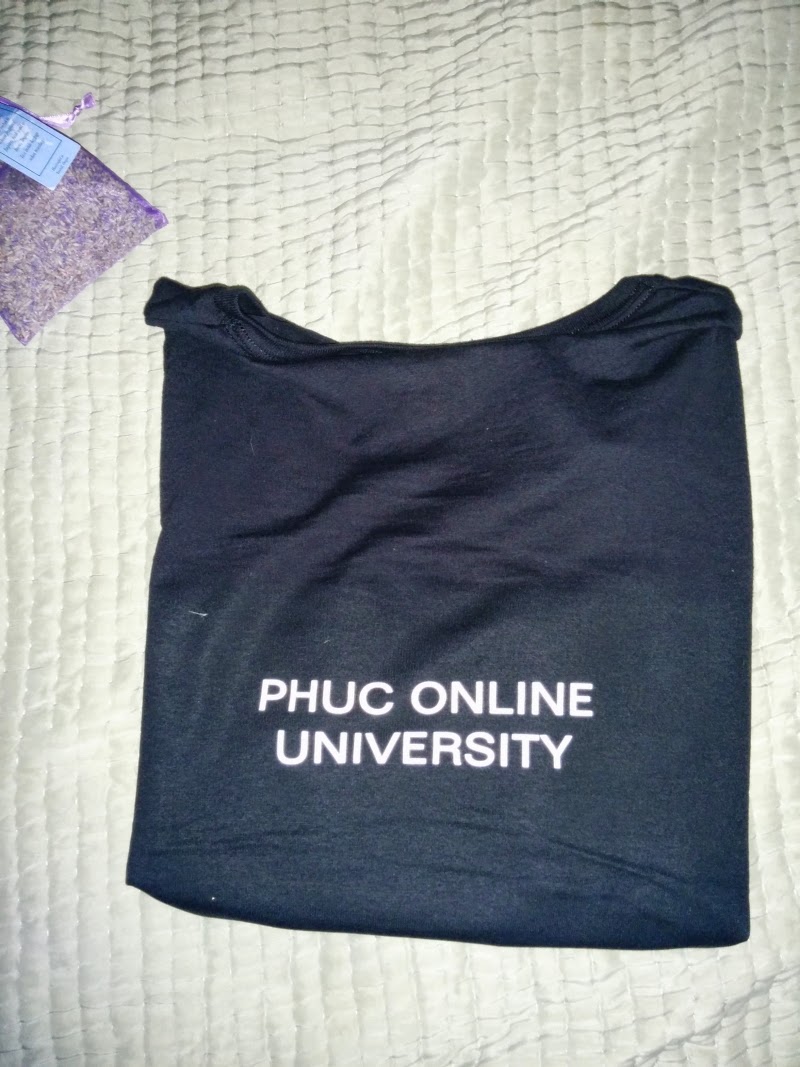 Yes, I do have the coolest dad ever. My friend asked me to let him know that she's up for adoption.

I'm thinking about things that pop into my head that I would like to make standardized, socially appropriate questions. Last night one of the guests emailed me two hours before the dinner, asking what to wear. I suggested business casual. OK, fine. Then she texts me twenty minutes after the event started. "Where do I park?"

To which I wanted to reply, "Are you a grownup?" 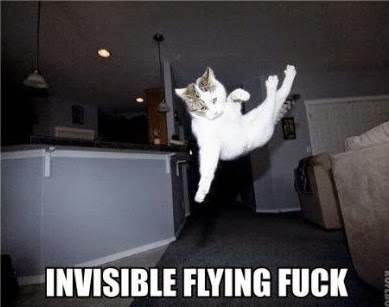 Wouldn't that be cool as a socially acceptable, standardized question/reply to asinine requests?

I got into it once again with our national organization today. Never mind the fact that the big event in May was the biggest one we've ever had, and is on track to raise more than we've ever raised. Here's the conversation, shorthand:

Him: You have XX number of participants who haven't raised any money.
Me: Actually most of them have. But the website is difficult sometimes, so they send in checks rather than raise money online.
Him: Why aren't they posting the information about check donations on their own web pages?
Me: Refer to my earlier response.
Him: Why don't you do it for them? (Background: around 1,800 people register for the event online. He's asking me to manually enter every fucking check for them on their individual web pages so they can show their friends. There are about $26,000 in checks so far.)
Me: Seriously?
Him: Other sites do it. (I'm sure a similar argument has been made for putting firecrackers up your ass, would you do that?)
Me: I don't have time to hold the hands of 1,800 people who can't figure out your (shitty) website.
Him: Don't you have volunteers?
Me: Yeah - and here are the 100 more valuable things they do for us, like help people get resources when they're in crisis. You know, we have a lot more going on than this event.
Him: I hear that a lot.
Me: And you know why? Because it's true!

And then I said this, verbatim:

"Frankly, I don't give a flying fuck what other sites do. I'm grumpy and I don't appreciate you chewing on me, and I'm not talking about this anymore!" 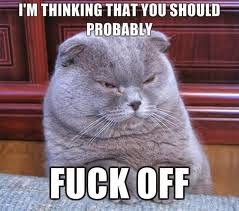 I followed this with an email full of stats - how many resource request calls we've gotten last year (almost 2,000), how many people we directly served with our staff of three (more than 8,300), how we've added an entire new program this year than I am managing.

But being able to use the words "flying fuck" at work was rather satisfying, as was the fact that I knew my boss would approve. In fact, I think that should be a socially acceptable standardized reply to asinine requests as well.

If this isn't nice, what is?

Most of you probably know I'm a huge fan of Kurt Vonnegut. Even though he went to heaven seven years ago (bonus points if you get that), his estate is still finding ways to churn out books, most recently in a volume of graduation and award acceptance speeches. (Highly recommend this, by the way.)

Among other things, he recalls that his uncle Alex taught him to stop and enjoy nice moments in life. No easy feat for a guy who battled bad depression his entire adult life, but he made it a point to share that story. They'd have, say, lemonade on a nice day, and his uncle would stop and say, "If this isn't nice, what is?" 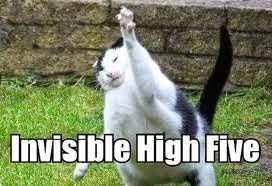 Since my uncle had his stroke random stories and memories have been popping into my head. When he was married to my aunt, they lived near us in California and we spent lots of holidays and other occasions there. My uncle was always hilarious, even when talking about and dealing with things that would have made other people see sideways. Even in the hospital, he recently told my dad, "I'm getting out of here one way or another!"

He has always had a way, in effect, of saying what Kurt Vonnegut's uncle said.

Here are some snippets:

- On the fact that their first house wasn't selling after they had moved out of state (after having rented it to college students): "I went to check it out and found out what the deal was. I called the realtor and said, 'Hello! The house isn't selling because there are 1,234 holes in the wall, and a PASTEL PICTURE OF GARFIELD has been drawn on the wall!'"

- They were notorious for letting their four kids, my cousins, have free reign growing up. At the ripe old age of six, my cousin Eve got mad at my uncle and spouted off, "Dad, you're an asshole!" We were silent and shocked. Later on that afternoon, she got mad at him for taking "her" chair. He quipped, "What do you expect from an asshole?"

- He told us that my dad asked him his GPA in graduate school. It was a 4.0. Then my dad apparently said, "Hey, my sister is coming into town this weekend, would you like to meet her?" My uncle: "Well apparently it was a good thing I didn't have a 3.5!" 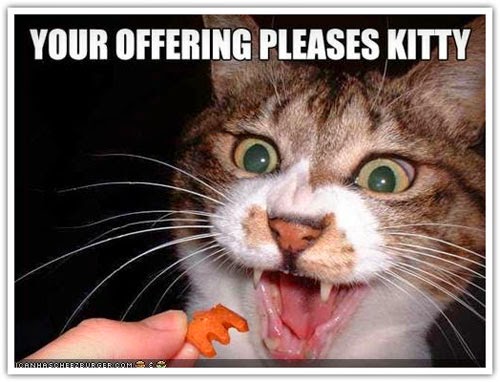 And on one visit, the main entree was ham, which always made me ill even before I became a non-meat eater. He saw that I was uncomfortable, and without me saying much of anything, he got up from the table and started cooking me a piece of turkey.