Ending with a laugh

A lot of really crap things happened in 2011, both in our lives and in the lives of friends. So I'm hoping for a better 2012. Never have I looked forward to a new calendar year so much!

However, that's not to say that there haven't been fun times and funny times. I spent probably an hour laughing my ass off with my friend's teenage boys over this book this afternoon. And we may or may not have used one of the stickers to temporarily vandalize a sign at the mall.

I will wrap this up with a memory inspired by Granny Annie, who asked in a post awhile back about our favorite holiday memory.

I don't think I've ever written about my late godfather Irwin. He was one of the strangest and most loveable people I've ever met. One of the qualities I prized was his sense of humor and ability to laugh at himself. He closely resembled Boris from the Rocky & Bullwinkle Show. No joke! 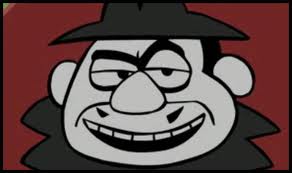 One year we all headed to San Antonio for Thanksgiving, and during dinner he gave this impassioned speech about the valor of the soldiers at the Alamo. His crescendo (picture this in a thick Bronx accent): "And that was the cry...Remember the Alimony!" He said this by mistake, of course, and all of us just stared. Then we all roared. It was a family joke for years.

I hope 2012 is a great year for all of you, and that you laugh long and frequently, like no one's watching.
Posted by Riot Kitty at 7:16 PM 17 comments:

Then something went BOOM!

Do you remember that line in The Cat in the Hat, "Then something went BOOM!" ?

That about sums up my morning. 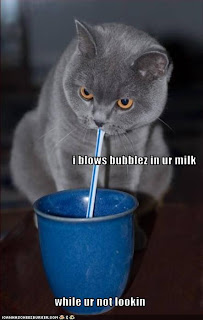 Never again will I take a week off and then return as the lone employee in the office.

I get in - early! - no one there to see it. This, after a week and a half prior to vacation where there was a fucking car accident or stall every single day on the way in or the way home.

We have 10 voicemail messages. About half of them are from someone who my boss says "has issues," but who is sane enough to hang up on us if we answer the phone, and leave profane, abusive messages to no one in particular over voicemail.

Another message from someone who called yesterday (a holiday) yet claimed she called and left a message "four or five days ago." (You forget, madam, that we are in the digital age.)

A few minutes into this, and in the space of about 30 seconds, my volunteer calls saying 1) she won't be in, 2) something about her cat attacking her, 3) something about how her doctor is an asshole, 4) she will be in, 5) something involving the word "urinary." TMI, folks, TMI!!

Then the lights go out.

Then my friend texts saying his wife left him.

Then my boss walks in to do payroll and he's all kinds of tired and grumpy, coming in during his vacation.

And the day just went downhill from there.

I had more calls today than I typically have in a week.

A couple of samples:

"I'm in a graduate program studying (topic.) So I want to come in and watch a group session of (topic.)" I explain that we are not a service provider. I explain what it is that we do.
"So you don't have groups on this topic? So what is it that you do?"

And mind you, I'm running on four or five crappy hours of sleep, since I stayed up late during vacation.

Oh, while I'm venting - I am sick of seeing stories about Newt Gingrich being an insensitive, egotistical prick. That's news?

This song cracked me up when I was little because my brother's name is Nik. Also, because it was done by Muppets.

Ants in your pants? How about caffeine?

You know that we have become the laziest, dumbest society ever when something like this is invented. 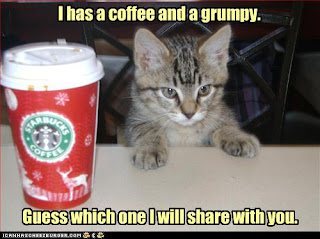 Mr. RK first told me about caffeinated pants last night. Yes, you read that right: caffeine in your pants, claims at least one company, will make you lose weight. Forget about eating healthier, eating less, and exercising; you can supposedly get slimmer by the equivalent of wearing a cup of coffee on your bottom. And sadly, this means market research preceding the production of said pants means that statistically, there are a hell of a lot of dumb people out there.

"Even if my head is asleep, my ass is awake!" said Mr. RK. Because the caffeinated pants are exercise pants, so the coffee is on your ass.

And legs. And crotch region. Come to think of it, there could be people that would purchase this product for perverted reasons. So if you'll excuse me...
Posted by Riot Kitty at 8:38 PM 17 comments:

I'm stealing a Christmas meme from WIGSF. The lovely Claire also posted one, but this one is shorter and there are more opportunities for snark... 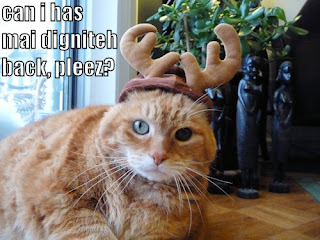 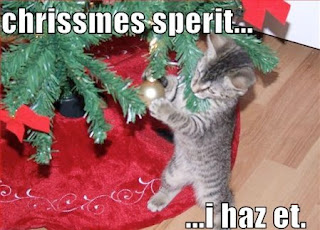 *Ditto for the Easter Bunny. But I was allowed to believe in the tooth fairy until the fourth grade! Go figure.
Posted by Riot Kitty at 11:48 AM 15 comments:

Does my car make me a jerk?

I've always had small cars, even though I've always wanted a muscle car. 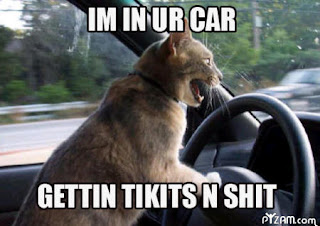 Some funny stuff has happened since I got the Mustang:

1. Far fewer people are rude to me in traffic.

2. A few people now seem to go out of their way to be rude in traffic...presumably because of the Red Menace. Like tonight, this idiot in a Toyota actually sped up to prevent me from merging. I had nowhere to go. Had I been in the Saturn, I'd have had to slam on the brakes and panic, but - hahaha - who was he kidding? He was not going to beat me. As Mr. RK put it, "Vroom vroom and fuck you ;)"

3. I feel like I have to make it clear that I got a good deal on the car, because I'm kind of embarrassed to have a car that makes people say, "Wow! Nice car!" So even though technically it cost the same as a Toyota Corolla, I wonder: Does my car make me a jerk?

Awhile back, WIGSF wrote a blog and mentioned that what people drive can make statements about them (yes, if you drive an SUV big enough to house a small nation, you are probably a prick.) So I wonder, what does the car say - or seem to say - about me?

FYI, one of the lunch ladies at my high school cafeteria, who was probably in her late 60s at the time, had a 5.0 Mustang. How's that for defying stereotypes?

I've just changed the car, not me. But it's interesting to see how that one small change can stir things up. And if you'll pardon me, now I'm going to go envy some penis.
Posted by Riot Kitty at 8:30 PM 15 comments:

My brother sent me "The Muppets Family Christmas" - I had never seen it in its entirety, and it is pure awesome! Well worth watching, if you enjoy laughing.

Here is a little preview.
Posted by Riot Kitty at 9:18 PM 3 comments:

So today, I defied the stereotype. How? I bought a bright red muscle car. 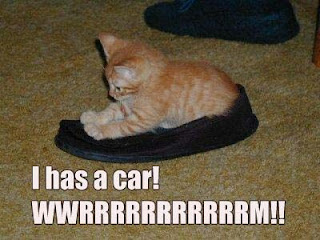 Seriously, I had my other car for 8 1/2 years and wasn't in a hurry to get another one. But I have wanted a Mustang since high school and finally aged out of the expensive insurance bracket. I was thinking about getting one in a few months and then this week a good friend's car blew up. She had no means to get another one, and I had taken very good care of my car, so I gave it to her and got this little beauty. 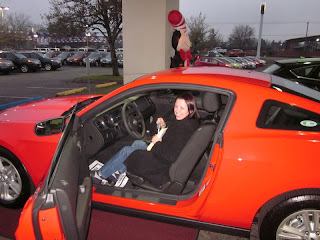 Mr. RK spent a couple of hours shopping around online and negotiating prices. We got a great deal - believe it or not, it was about the same price as a Toyota commuter car. Apparently they only run into the big bucks when Mr. Empty Pants types come in and want to supe them up.

It was pretty funny seeing the slight surprise when the guys (there were no women) at the dealership found out it was for me...not quite so funny when I couldn't figure out how to get it into reverse, because reverse is IN THE FRONT and you have to push down first. I nearly hit my friend's apartment building!

(Seriously, reverse in the front? Isn't that like having a penis on your backside? Anywho...)

It's gray and freezing here, so I like to think driving this down the street is contributing to the general holiday cheer.

I was going to put my NYU license plate frame on, but the dealership we bought the car from is called Dick's. So just because I'm immature, I think I'll leave that on for awhile.

Lastly, the plate ends in the letters "FJW." My first thought was, "Who is JW?"

Dead or in prison? You can still give us money...

Until very recently, it was impossible for us to get a current membership list, so we used old lists and purged them as necessary.

Somehow, that didn't stop us from sending a fundraising letter to two people who have been dead for years, and someone who is a member, but currently in prison.

So next year, when we do this again, I should start with a disclaimer: "We apologize if you have received this letter in error. If you are deceased or incarcerated, please feel free to return it." 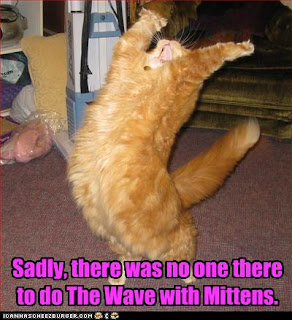 Granny Annie lost one of her animals recently, and wrote a really thought-provoking post about her relationships to her pets. When her neighbor, whose dog killed the animal, offered to financially compensate her, she found herself wondering how to explain the loss to someone who really did not understand.

Had I not met Mr. RK, there is a real possibility that I would have turned into crazy cat lady. And I would have been just fine with that! I love family and friends, but I love my cats more than most people.

Animals don't disappoint me like humans do - and our furry little guys are just wonderful.
(They seem to know when we need them most: for a week after Mr. RK's mom died last summer, they both slept right by his pillow.) 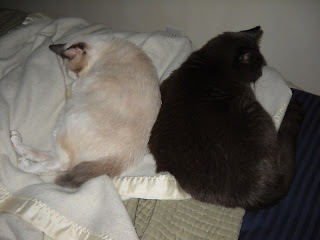 Pets don't lie to you. They are always happy to see you. They will let you know what they want or need without playing games. If they're irritated at each other, they'll wap each other and wrestle until they get it out of their systems (try doing that at work!) And they are super loyal.

They won't secretly be irritated at you if you get them the wrong kind of birthday present, or fail to return their call as soon as they would like you to.

Me - I am direct. But not everyone wants to be direct, or wants other people to be direct. I've run into problems with family and family-in-law when people talk behind each others' backs instead of being upfront. Repeatedly, I have asked, "Why don't you just tell him/her what you think?" (Or, in some cases, "Why would you have a problem if I told him/her what I think?") 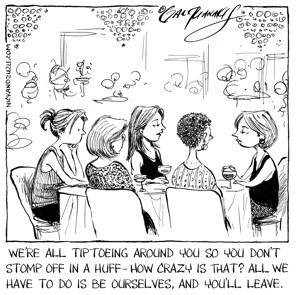 I spend a lot of time wondering what humans need or want, trying to deconstruct what makes them tick, etc. Yes, part of this is my fault because I am an inquisitive person and a sociologist/social worker at heart; however, sometimes I wonder if the ability to speak a language has really tripped us up as a species. I'd rather someone just wap me with their tail if they are irriated.