Sorry about the absence, with Mr. RK in Asia on business I've had my hands full keeping up. Luckily I have a helpful sibling staying with me. I promise I will visit your blogs soon!

After the last post about the ridiculousness of (halfassedly) legalizing marijuana here, I thought I'd offer a few other choice tidbits that you could see on an episode of Portlandia, and they'd be true!

#1 - Call in the goats! What to do with invasive plants? Click on this picture for details.
The funny thing is that this is a pretty redneck county - only in Oregon would you have rednecks calling for environmentally friendly solutions to noxious weeds. (Question for gardeners: what are non-noxious weeds?) This county has two reasonable people and three Tea party nuts (wait, that's redundant) on its board of commissioners. I had to seat two of the commissioners separately at a work event because one of them had threatened, at a public meeting, to assault the other. True story. 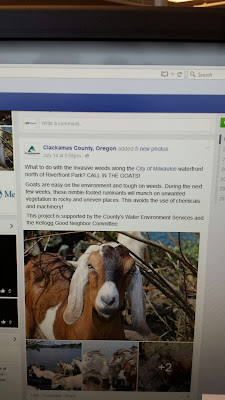 #3 - I want my fetish title back, and I'll sue!
Ditto with a headline that reads, "Ms. Oregon State Leather, stripped of sexual fetish title, wants it back, plus $100,000." My dad said, "Well, let her prove that she deserves it! (Here's a link to the story. It's clean.) I'd love to be the attorney representing her - or at least hear the oral arguments. No pun intended.

Anything going on unique to your neck of the woods?
Posted by Riot Kitty at 9:29 PM 19 comments:

How to legalize drugs without making any sense (or cents)

Lo and behold, marijuana became legal in my state last week. Yet as with everything that follows a citizens' ballot initiative, the bureaucracy has to take time to catch up.

So get this (and this is all true - I don't have enough patience to invent something so nonsensical):

Marijuana is legal to possess (in certain quantities, depending on whether you're at home or in public), to smoke (in some places and if you're 21 and over), and grow (ditto on quantities and age.)

However,  you can't buy it yet, unless you've got a medical marijuana card (medical marijuana was legal for several years here before last fall's ballot measure passed, making marijuana legal. Also, it is worth noting that more people turned in votes on the measure than cast votes for governor.)

In what other metro area would the police department post a graphic like this on Twitter? And who the hell is that little clay guy? Do I have to get stoned to figure that out?

The state's new bureau of marijuana has not yet set up a system of stores. God forbid you let private enterprise do it; all hard liquor sales are controlled by the state here - sort of like Communism, but without the bribery handshake - and they're the agency in charge of sorting out pot.

So, you think, can we drive 20 minutes and buy it legally in Washington, and smoke it there, or bring it back here? No. Because that would be trafficking, according to federal law, which still makes marijuana illegal. (You don't have to be stoned to be confused about this.) 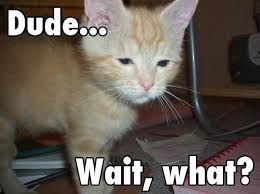 At any rate, our local rag published a guide to the new law AND a guide to growing. I kid you not. The same company that owns this paper is opposed to raising the minimum wage, but they must instinctively know, on some level, where their bread is buttered.

So in effect what we have is a kind of de facto amnesty law. You are allowed to possess plants and the dried stuff for smoking, and the oils (I think that's what is used, but I haven't ever baked anything illegal - I have enough trouble preventing legal recipes from catching on fire) used to make food that can make you high. And how, I ask, do you get this stuff? You can get it as a gift.

Yes, really. So in essence, you have to have a friend who probably dabbles in illegal drug sales or purchasing give you legal pot.

There are some things about this state that are so fucking backward, I don't know why I'm surprised.

Maybe everyone started smoking before they wrote the new laws.
Posted by Riot Kitty at 11:55 PM 23 comments: