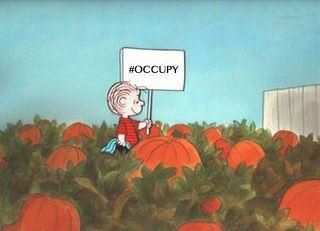 17 years ago tonight, I went to a surprise 30th birthday for my cousin John in New York City. I've written about him here before.

Do you ever wish you could write someone who has left this world, now that you're older and wiser?

Things I have learned from living in the Northwest

This month has flown by so quickly that I forgot last month was my 10th anniversary of living in/near Portland. And next month, I will have lived in the Northwest 11 years. 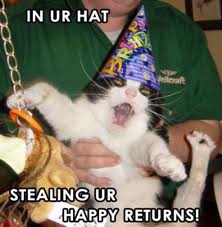 This may be no big deal on the surface of things, but considering I have moved 20+ times in my life, this is quite a milestone for me.

I consider this a relatively quiet place compared to other places I have lived (New York, for instance.) But that's not to say it hasn't been interesting.

I will admit to having major culture shock when I first arrived. Among other things I learned really quickly:

1. Wildlife is not only in the zoo. My first constituent newsletter from my state reps had an article about "what to do if you see a wild cougar." (The cat kind, not the Real Housewives kind.)

2. Things that have cult followings like nothing I had ever seen before: college football (I just about peed my pants laughing at Ducks vs. Beavers), fishing, and food. Foodies are everywhere!  Mind you...

3. It is an utter impossibility to get a salad as an entree here. That said, there is soup everywhere, all year round. Nom! But there is a shortage of good Chinese food.

4. Sun is not just a commodity - people are visibly happy when there are "sun breaks" mid-winter. It's like everyone has an extra orgasm each.

7. There are an abundance of small towns named after other countries and global cities, but they're mispronounced. E.g. Madras ("Maadrass"), Lebanon ("Lebenen"), etc.

8. Speaking of pronunciation, nothing sounds like what it's spelled like. A few years ago, an e-mail went around the newsroom where I was working. "You know you're from the Northwest when you have no trouble pronouncing Sequim, Puyallup, Kalama..." Tip for the uninitiated: let someone else pronounce it first.

9. Cops don't always wear blue. My little brother first noticed this when my stepmom got pulled over (he was four at the time) by a sheriff (khaki green uniform) and pointed out, "He's not a real policeman, Mommy! He doesn't have a blue suit on!"

10. It will be a perfectly nice 50 degrees out, and some idiot will say, "OMG, IT'S COLD!" Don't ask what happens when it snows. 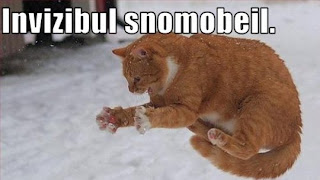 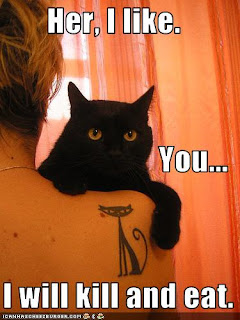 If you haven't read Claire's weekly posts, they are highly recommended!

Today, I am liking:

Homemade chili. I am still under the weather and a batch of this made me feel warm and toasty.

Paul Simon. My dad and the older of my younger brothers are going to see him in concert tonight, and I am so jealous! So I have been listening to one of his CDs all day.

This bass that Mr. RK made. Isn't he talented? Technically, he says it is "almost" finished. 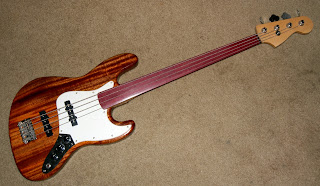 Joey's post about writing a letter in retrospect to his 16-year-old self. This moved me close to tears. I'll try doing one myself when I think I'm brave enough.

This awesome Nightmare Before Christmas figure set that Mr. RK got me. I think one of the reasons we get along so well is that we're both unashamedly weird. 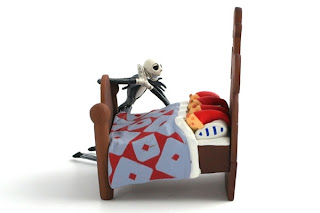 Having my goodies returned. (You knew I had to put in something funny, didn't you?)
Posted by Riot Kitty at 6:52 PM 16 comments: 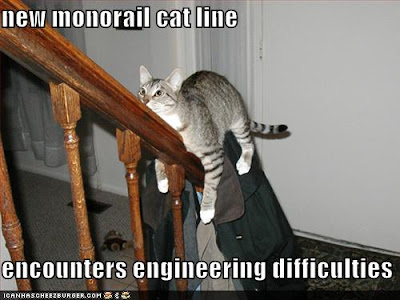 What happens when you live with someone who 1) is an engineer by profession and 2) likes to build/tweak/make things: your beauty products disappear.

Things under my side of the sink (where I keep beauty and first aid products) keep disappearing.

Similar items have been transformed for his project purposes.

Skin So Soft? "I used that to grease the bearings in (some machine), because it's mostly mineral oil."

Rubbing alcohol? "I needed to mix it with (some product) to do (something.)"

(TMI warning: this next is not PG, but it is not violent or graphic. But you have been warned. Click on the link, and you'll know I have sex. Oops. I blew it.)

But it really freaked me out when this went missing.

"I needed to polish a piece of plastic." 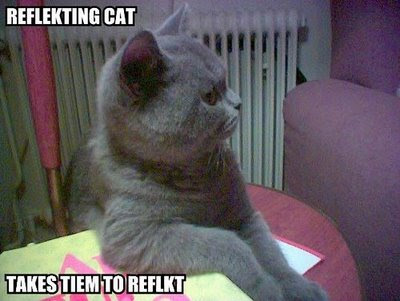 Claire inspired me to un-grump, so here I go - some things I like:

1. Dessert. Enough said.
2. Humor. A friend told me today that he wanted to start his own green energy company. Why a green energy company? "Because I don't want to cook, and I don't want to touch anyone!"
3. Iced soy mochas. Because.
4. My kitties. One of my dear boys is recovering from eye surgery. We might get him a pirate eye patch for Halloween. Incidentally, Papa RK said it sounded very expensive to take him to a cat opthamologist...I said, "Maybe, but I like him more than most of our relatives."
5. My brother's upcoming visit. I am going to get him a new phone for his birthday. I think this makes me cool for life.
6. Flower pictures. I took some pretty neat ones in London. See below.
7. Exchanging e-mails with my great uncle, who at age 80, just went to San Francisco and had Thai food for the first time. 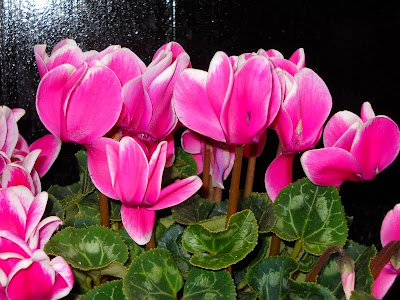 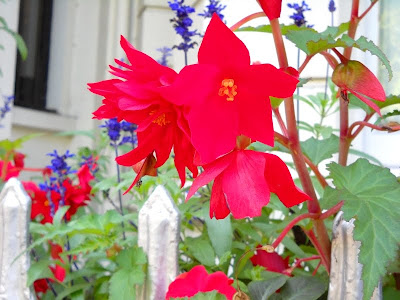 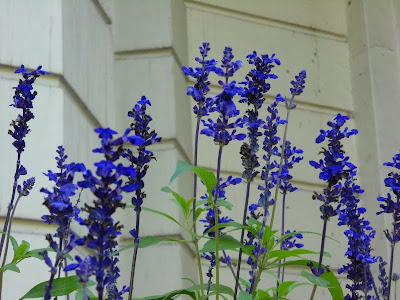 What are you enjoying lately?
Posted by Riot Kitty at 8:22 PM 14 comments: 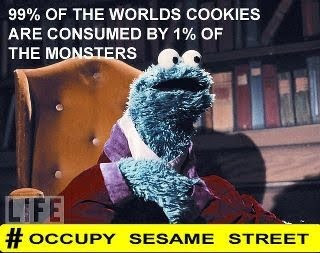 So Mr. RK came up with that title - and then coincidentally found this excellent picture!

He suggested I argue my statement, so here goes.

1. They don't sleep on Hermes sheets with your bailout money.
2. They don't charge you debit card fees to access your own money.
3. They have chocolate chips. Or peanut butter.
4. There are many different kinds of cookies, but only one kind of greed. (Mr. RK came up with that one.)
5. If you are selfish with greed, other people get hurt. If you are selfish with cookies, well, NOM!
6. Greed does not have frosting.
7. Greed does not have cute, furry blue monster to spoof the political issues of the day.
8. Cookies might make your ass bigger, but greed makes your heart smaller. (Mr. RK again.)
9. Cookies are made with love. Greed is made with ... well, not love.
10. Cookies are like sex: you can enjoy them by yourself or with other people. You can only enjoy greed by yourself! (Mr. RK.)
Posted by Riot Kitty at 9:01 PM 20 comments:

How to lose friends and not influence people 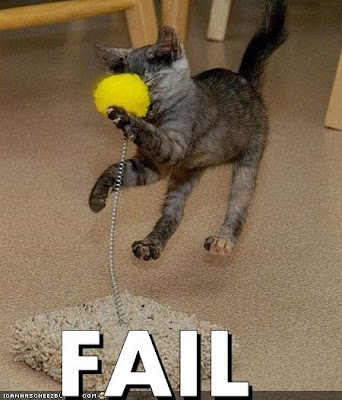 I went to an event tonight for the local county chapter of the organization I work for. So keep this in mind - if it's an event that I am in charge of, I am fearless and can work a room or talk to anyone. Any other event with more than two people, where I have to be social, absolutely terrifies me.

So I suck it up because I want to thank someone who did the centerpieces for our big dinner at work last month. He said, "Actually, my mom was the one who designed them - here she is."

I walk up and give her a big smile and introduce myself.

"Hi, I'm Riot Kitty from (Riot Kitty's organization.) I just wanted to introduce myself and thank you, because I was in charge of the dinner and the centerpieces were wonderful!"

She replied, "Well hello! Nice to meet you! But...I didn't do the centerpieces."

Turning about 12 shades of red, I turned to the volunteer who said, "Um, my mom's at the next table."

(Claire: I consoled myself later with an epic nom, e.g. chocolate croissant.)
Posted by Riot Kitty at 10:55 PM 19 comments:

Papa RK sent an e-mail a couple of days ago, with the subject line, "I don't know how this happened!"

My little sister was supposed to get a puppy at the shelter, but she came home with two new kitties instead. (There is already a grown-up boy cat and a bird that he consistently tries to eat. Everyone except my little sister is rooting for him.)

They had already been named by their cat foster family - Gilgamesh (orange) and Leonidas (Siamese.) I asked Papa RK who came up with them.

"Some pretentious prick," he replied.

The ring-tailed lemur is my spirit animal 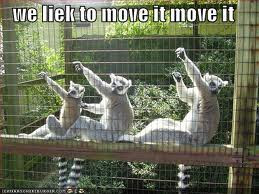 Every year, huge nonprofits send us probably half a dozen free calendars, thinking we have money to give them. (Tip for the uninitiated: I work at a nonprofit that is so grassroots we do not even have free pens. If you can afford to send me anything in the mail, you can afford to do without my donation.)

Anyhow, I am a total sucker for the animal calenders. The one we have hanging currently came from the World Wildlife Fund, which I stopped supporting when they sent me a membership renewal that read "Statement enclosed." Like they're a fucking credit card company. Right. Plus, I thought it was incredibly lame that they sued the pro wrestling outfit and made them change their name, just because they had the same initials.

Doesn't stop me from enjoying their free stuff...

Each month of the 2011 calendar features a different animal - a photo and a paragraph of info.

Last month's featured animal was the giant panda. I've decided this is the animal Mr. RK would be if he were not human: "Giant pandas are generally solitary animals...encounters are rare outside of the brief mating season, but they communicate often through vocalization and scent marking."

(OK, he doesn't do the scent marking and we do talk outside of mating season, but he's generally even more anti-social than I am, so you get the point.)

October's animal is the ring-tailed lemur: "Females within a troop are dominant, and if an argument breaks out between a male and a female, the female always wins."

That, my friends, is my spirit animal.