Things I have learned this week at work 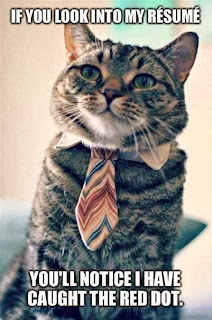 1. Some people are like dogs. They see everything as competition, are territorial, and piss accordingly. The best thing you can do is try not to get peed on.

2. Some people need to hear the same thing, spelled out, 12 or 14 times. Don't expect they will understand even after that.

3. Some days I feel the need to jump up and down and say, "I AM YOUR BOSS!!!!" But this would accomplish nothing, so instead, I am patient, and I document.

4. The people who work the hardest are the ones who take the least credit, and are thrilled if you get them coffee once in awhile.

7. Humor can get you through just about anything.

8. It's nice to have social time with the people you work with outside of the office. The introvert in me fights this, but it turns out well when I go.

9. Reinforcing what I like about working at a nonprofit: when we do well, instead of executives getting more cash, we expand our programs and more people get help. We got a grant recently that created a couple of new positions and a new program.

I had an all-day meeting for work Saturday (ouch) and another meeting this morning that involved icebreaker exercises.

The one at my weekend meeting involved pairing off with a person you hadn't met before or didn't know very well, and then introducing them to the group with three things about them that had nothing to do with work.

One of my colleagues was introduced this way: "She doesn't like hugs, and she doesn't like chocolate." There has to be a fucked up Hallmark card in that somewhere. 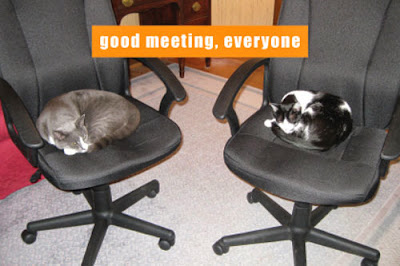 I found out that someone from our national organization, who I have known for five years, used to play the accordion and write accordion music! Another colleague, who I have known for an equal amount of time, apparently reads tons of books at one time and leaves them strewn all over her house. (I suppose she cleaned up before we visited.) Three things my pair-off chose to introduce me with:

1. When I was a journalist, I interviewed Dan Quayle. He really is dumb as a rock. 2. My great-grandfather was a volunteer deputy sheriff and once helped capture Baby Face Nelson. He was hiding in a barn under a bale of hay. 3. You already know about my e-book for kids, but my coworkers didn't.

And this morning, we were each asked to introduce ourselves and find an adjective to describe ourselves that started with the first letter of our first name. I chose multi-tasking and musical, because I sing loudly when I am in the car by myself.

Someone I work with in a policy capacity said, "I didn't know that!" Of course not, rocket scientist, when have you been the fly on the wall in my car?

After the meeting someone went out of his way to tell me that he was also an introvert (I had mentioned that I am an introvert except in the context of work/a cause) and actually ended up being quite chatty.

This is fun in an eighth grade girl sort of way (read: I love it), so I'm opening it up for sharing. Three things and and adjective. Pretty please?
Posted by Riot Kitty at 8:55 PM 19 comments:

This is one way of dealing with things

Mr. RK had a day at work that was full of, as he put it, "clusterfuckery."

Part of the problem was that an overeager engineer tried to "help" Mr. RK's team but kept making the problem worse. He is a French engineer, and didn't seem to understand when Mr. RK and the others told him to stop trying to help.

Finally, they called his boss, who literally grabbed his chair and started rolling him out of there.

There are so many moments where I so wish I could do that!

For instance...two new staff people started this month. One of them started this week. And in conversation with a volunteer, she was told, "Oh, and you know what people with mental illness are like!" 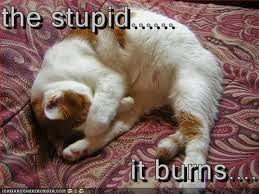 Well actually, dipshit, yes she does - because she has bipolar disorder. She just doesn't come with a blinky sign. And apparently, you don't know as much as you think about people like her.

That made me so mad that I wanted to spit (on the volunteer), and the new person is going to let the volunteer know that this is absolutely not OK, that it is the kind of stigma our organization EXISTS TO ERADICATE. Um, HELLO.

But it would be cooler if I could just whisk her off on her chair, wouldn't it?

I remember once, when my brother N and I were little (I think 8 and 11) and he got in trouble for something, he looked up at our mother and said, "Do you ever have one of those moments where you wish you could fast forward life?" And we all laughed our asses off. I don't remember if she forgot to get him in trouble, although at that age, being in trouble meant not being able to watch Saturday morning cartoons.

Suffice to say we all have our trials, and from time to time (though it may seem like all of the time) we have people we love who are having serious problems. And all we can do is our best, even though we must face the fact that our best can still fail.

If I don't visit blogs or post as often it's just because the current thing going on is sucking up a lot of my time. In short, I have learned: 1. the foster care system doesn't just suck, it can be downright dangerous; 2. even with advanced degrees, some social workers can have shit for brains; 3. I am so fucking lucky that I have one good parent (and now one good step parent also) as many people don't have that; 4. I am capable, when necessary, of having a forceful conversation without swearing. YESSSSSSSS!!!

So in the meantime, in the interest of not making everyone cry, I leave you this little gem.

Suck it up, princess

Lately I have been feeling slightly overwhelmed, for both good and bad reasons, all of which are out of my control.

So I saw this on another blog and am repeating it to myself: 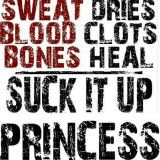 And no matter how many strange situations pop up, there are always people who make me laugh.
I had a conversation with a colleague today who was bitching about someone we work with at another organization.

"I have to give him the benefit of the doubt," I told her, "but if you find an email chain" and he's screwing us, "let me know if I need to cut his nuts off."

I have a very laid back volunteer who was across the room and managed to hear me. He has many years of recovery from alcoholism and resulting from that, criminal justice experience. He is very open about it and can even joke about it.

He piped up, "Hey! Tell your friend if she needs someone's nuts cut off, you know someone who's cheap, AND has priors!" (Meaning prior convictions.)

And if that wouldn't make your day, I don't know what would! I'm grateful to have people who know how to make me laugh, and take the time to do it.

Is there a proper career path for sexting?

A big dilemma was resolved at work yesterday when a local politician - who had been invited to speak at an event of ours before a big sex/budget/work scandal and a criminal investigation - finally resigned. We would have had to uninvite him for obvious reasons.

Emailing a volunteer, I wrote that it was too bad that he had fucked up like this (no pun intended), because he was really good on our issues. If he would have screwed around with someone outside of his workplace - someone he didn't get into a much higher-paying, cushy job - he probably could have kept his.

And she wrote back:

"Or he could have just have kept it in his pants altogether.
I do get tired of all the politicians being so superior to everyone to think that they're not going to get caught in these things. They're in the public eye. If you want to cheat on your spouse or sext people, go be a plumber, politics is a bad idea. It shows a tremendous conceit to think that everyone else is too stupid to notice." 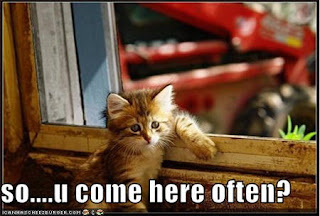 Which immediately made me think, sexting plumbers? All of the equipment right near the belt?

Is there a proper career path for sexting? We could come up with some spiffy taglines.

Firefighters...too hot for your phone to handle!

Engineers...wait, that won't work, there would be too many discussions and meetings to get anything done. (Which is why I never need to worry about Mr. RK doing this. Thanks, honey!)

I have to go to court tomorrow. I didn't get in trouble - yet - it's regarding a young person I am advocating for. He is (unfairly in my opinion) in the foster care system and I want him to be able to have an adult to connect with outside of the system.

Still, it is awkward (for a number of reasons I'm not going to go into because you don't want to read a War & Peace length story), and I am not looking forward to it. It's not every day that I have a sheriff arrive at my house with a subpoena to appear in court. (Mr. RK, in classic form, answered the door and said, "I think this is for you!") Mind you, all the forewarning included a one-sentence email from the young man's caseworker: "We might have to go to court and may need you to provide insight about (this person.)" Thanks, lady, for preparing me so very thoroughly.

Anyhow, when I have difficult, anxiety-causing stuff - e.g. dental appointments where they scrape under my gums, etc. - I get through by promising myself that AS SOON AS IT IS OVER I am going to go get some kind of treat. Sugar-free something, I don't know.