I may be waiting with marshmallows, but I'm not done.

I've been agitating on LGBTQ rights since high school. The Supreme Court decision was exhilarating, but incomplete - I've found it hard to find words to write about this and have been mulling it the past several days.

My favorite response came from a gay friend who is American, but has lived in England for years because she and her wife could legally get married there. "Some pastor's gonna set himself on fire. And I have a marshmallow." Of course he backpedaled and said, Uh, he really didn't plan to do it...probably because so many of us were standing by with ingredients for smores!

We've come a long way in one generation - but not far enough. I remember, years ago, explaining to my little brother why marriage equality was important to me. At age 8 or 9, he laughed at the idea that anyone would object to same-sex couples marrying. I wish more adults would have such maturity.

I remember there being just one openly gay guy at my high school. He was mocked and ridiculed, and his parents kicked him out of the house. Today, there is a gay/straight alliance at my high school and lots of student resources, but it's easy to get too comfortable. There are still states where you can lose your housing or your job if you're openly LGBTQ. This is beyond wrong, it's unconscionable.

I'm lucky enough to have an amazing, loving, smart, funny spouse who happens to be my soulmate. I can't imagine us getting evicted or losing our jobs because we're in love.

It is outrageous for "religious" people to duck under the "I should be legally able to discriminate against you because of my own feelings" caveat. No way. My family is Lutheran and Jewish and I am the daughter and granddaughter of pastors. There is room for people of faith to be accepting, and frankly, if anyone has read the fucking Bible, you'll see that that's what Jesus did and encouraged us to do. Plus, not everyone's religious.

Take the hate elsewhere. If you are concerned about humanity, go do some meaningful volunteer work. Get your hands dirty.

Meanwhile, don't rest. Keep active. Segregation shouldn't exist in this country anymore. This is but one small step. Let us eat cake! 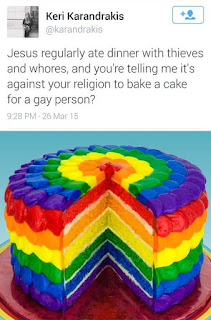 Sorry for the delay in posting! Things have been super busy here (I guess busy is the new normal) with preparations for comings and goings.

Meanwhile, our neighbors have installed a squirrel feeder. I know you're not supposed to feed wildlife, but these guys seem rather domesticated - and so far, it's keeping them from my strawberries.

Last year, they literally took one bite out of each berry like fucking Goldilocks. They'd rather have nuts anyway, right?

So before I embarked on the distribution of nuts yesterday, Mr. RK set up his "squirrel cam" and made this video. (Watch with the sound on. You'll be glad you did.) We wanted to have the theme music be, "I Want it All, and I Want it Now," by Queen, but they aren't licensing their songs on You Tube yet.

And speaking of back yards (or patios), I've been inspired to get some rainbow tea lights.  To make my yard relentlessly gay.

Seriously, does anyone else wish they had that much time on their hands? I LOVE this (straight) woman's response. You go, rainbow girl! I wonder what her idiot neighbors would think about Rainbow Brite. 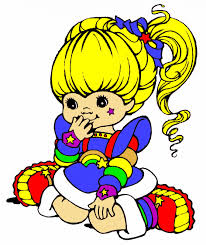 An open letter to the fluffy killers in my house

SURE, you two look innocent enough.
But I will never look at either of you the same way again. 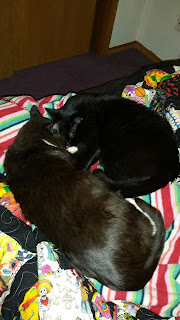 Yes, I grew up in the suburbs, a fact which is now painfully obvious to you, Mr. RK, and my friends. I have never, in fact, seriously thought you might eat something that didn't come from a can. Perhaps you'd give it a small chase, then get bored, like you do with your tiny soccer balls? Maybe you'd run away?

And yet somehow, a poor field mouse (make that ex-field mouse) somehow ran into the house last week, and you two ate it like a fucking hot pocket.

At least that's what I'm told. God bless Mr. RK for getting home first and cleaning up all evidence of your nasty snack. 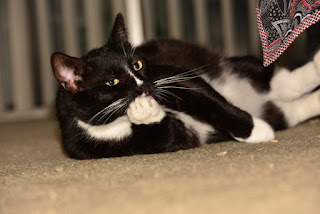 I get that there is a food chain. I get that nature is a cruel place. But seriously, why did this poor little thing have to run in and meet its doom with you? I am so disillusioned. Here I am thinking you love us, and the fact is that if we croaked, you'd probably say, "YUM! Fresh meat!"

Now I have no illusions when you sit and flick your tail at a squirrel or a blue Jay on the other side of the sliding glass door.

I've been obsessing about this the past few days, wondering WHICH ONE OF YOU was the killer. Or maybe you both were?

PS You know what else bothers me? YOU ATE THE WHOLE THING. Not that I want to eat a fucking mouse, or find a dead mouse in my living room, but still. Other cats are selfless and bring the entire mouse for their masters, but clearly, you two have no such consideration. All you left were the...well, never mind. Let's just say I owe Mr. RK a big favor.