At dinner a couple of weeks ago, Mr. RK asked, "Who would star in the movie of your life?"

And I replied, "Snoopy."

That popped into my head because Mr. RK says of all of the Peanuts characters, I am the most like Snoopy, in temperament.  (I'm guessing this is because I'm verbal and cute enough that I get away with it, as opposed to having long furry ears.) I think he is most like Schroeder: clever, a musician, aloof to interruptions (including people) that would drive most of us nuts.

I won't put in a picture of him here, because I don't want any of you to be scarred in a similar way!

Who would star in the movie of your life, and why? And which Peanuts character best fits you? 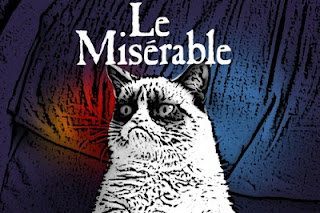 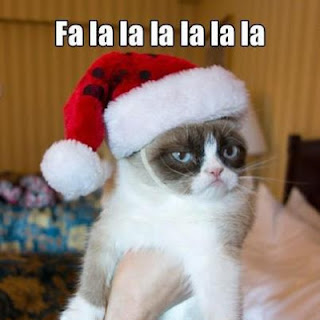 But can I say as a postscript...Tartar Sauce the Grumpy Cat, you are my reason for living!
Posted by Riot Kitty at 7:42 PM 20 comments:

I can has customer servez?

The other day, Mr. RK and I were talking about how some things should require IQ tests first - or should I say common sense tests. You know, gun licenses, driving licenses, reproduction.

After an experience at a work dinner Friday night, I am going to add being a waiter/waitress to the list.

As you know, I've been doing a vegan diet for the past few months. Now, this is pretty easy to do here, as I live near a city whose motto is "Keep Portland Weird!" (No, I'm not kidding. And yes, it really is like Portlandia.) There are entire restaurants and grocery stores that are vegan-only.

I called this restaurant ahead of time as the only vegan item on their menu was an appetizer salad. They said no problem, they could make any pasta or risotto without eggs or dairy.

I confirmed this with the waitress at a dinner with my boss, husband, co-worker, and his wife.

Then I attempted to order.

"The almonds are toasted in a little bit of butter, is that OK?"

No. No dairy whatsoever. (For those of you who might think I'm just being picky, I discovered that dairy not only made my blood sugar a lot higher, so now I can take a lot less medication, but that it also made me ache. A lot.)

I request the mushroom risotto without parmesan.

Don't. Want. Cheese! Remember, because I am a vegan and that means I can't have dairy. 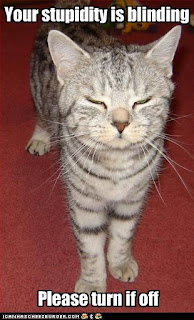 I am not making this up. In fucking PORTLAND, no less. Now mind you, Hawthorne Street in SE Portland is like weird central, or as close as you can get to being in Berkeley. Across the street from the restaurant is a pizza place where you can get pizza that is vegan, gluten-free, etc., and any combination thereof. By the slice.

She told me that I really wouldn't like the risotto, so they'd make me a vegan pasta.

Then she came back and said they were making me a vegan risotto.

Which was actually quite good, but at this point I was just embarrassed at being the center of so much unwanted attention and also probably shooting daggers at her through my eyeballs.

The best part: at the bottom of the menu, it read, "Please let your server know if you have any food allergies or dietary restrictions. We are happy to accommodate you!" 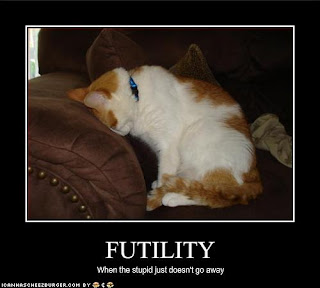 My friend K. always gets awesome presents - she is one of the wittiest people I know (and yes, I hope she is reading this) and this pack of awesome pens was among my Christmas presents. The idea is to let someone borrow your pen and let the fun begin!

Which one should I leave on my boss's desk? (Really. Vote. I'll do it.) 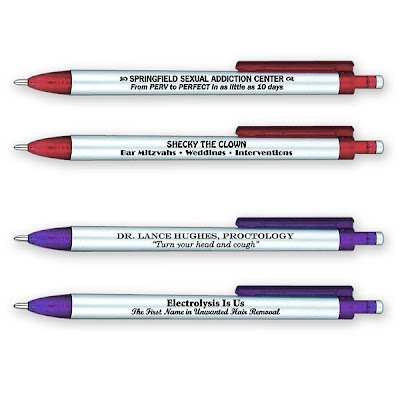 A party for Slim! (Or a shameless plug for blog friends.)

I love dry wit, and I love to laugh - hence, I love my buddies over at A Beer for the Shower. I also love to give shout-outs to writers who deserve to be, well, shouted about. These guys are, I'm convinced, going to be rich and famous one day, and then we can say, "I bought your e-book back then..."

So their newest e-tome concerns Slim Dyson, specifically his sensationally absurd life and times (doesn't that description alone make you want to read the book?)  For more about Slim and the book, visit this post.

Where this post comes in? Our buddies at ABFTS are having a contest/challenge, inviting fellow bloggers to describe the kind of bash they'd throw for Slim.

You knew this was coming.

Slim would meet lots of pussy. Pussy CATS, you perverts. 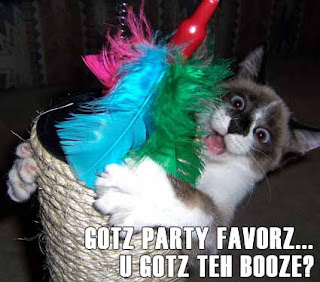 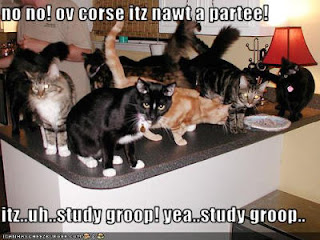 The only thing I can think to post right now

The past few days have sucked for me, as I am guessing they have for most of you. I can't post anything I'm feeling without being full of sadness and rage...so here's this instead.
Posted by Riot Kitty at 2:44 PM 8 comments:

A bit of cheer

I wrote a whole blog about the shooting that happened a few miles from work, and then decided it was too depressing for this page. I know two people who were there and thank God they are OK.

So! In lieu of that, I've stolen a lovely cartoon from Claire: 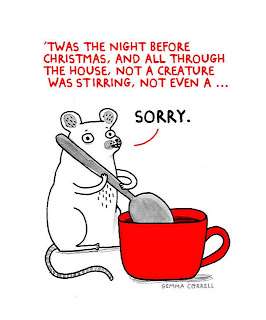 I'm going to be stirring things up with my little brother B for the next week or so. I'll try to visit your blogs as much as possible, or possibly post here if the vegan mocking gets too intense!

Claire is all about Christmas, and her cheery posts inspired me to share this picture with you. 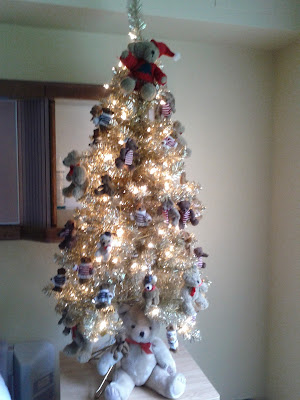 The backstory: my friend who is ill has been extra stressed because his wife is temporarily in a nursing facility. His one Christmas request was that she have a good Christmas - she is really into Christmas, and usually they put up a huge lights display and an 8-foot tree. Some people from his church came over and did the lights - complete with Manheim Steamroller music playing! - and he and I got this tree for her room at the health center. It was his idea to decorate it with teddy bears - when their son was alive, he used to collect them and deliver them to children's hospitals, which became a family tradition.

She loved the tree and I think it does look rather lovely, considering that us amateurs put it together!

Laughter is a random act of kindness

I am always amazed at how people going through terrible times are still able to maintain a sense of humor.

One of our volunteers at work had the week from hell and shared this picture of something her teenage son created...

Is he referring to the Mayan apocalypse, or the last sheet of toilet paper? (Hint: it's not the first one.) 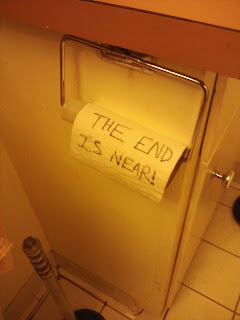 I had lunch with our friend who is very ill yesterday. He said, "RK, I am going to try my hardest to make the most of the time I have left. There's no point in pouting."

I felt ashamed, as I've been pouting (read: ranting, raving and driving Mr. RK nuts) about medication ups and downs. Mr. RK reminded me that I was lucky (blessed really) to be here, upright, to complain.

Then our friend (who is a pastor) told me this joke:

Three guys die go to heaven on Christmas Eve. St. Peter tells them that because it's close to Christmas, they need to give him a present on the way in.
RK
The first guy gives him a candy cane. The second guy gives him a charm he has on his key chain.

The third guy hands him a pair of women's underwear.

Shocked, St. Peter blurts out, "What is THIS?"

The guy replies, "They're Carol's."

See if you can make someone laugh today. It'll probably help more than you know. 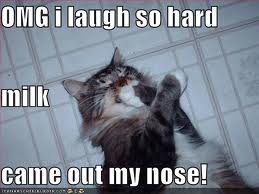 Conversations with my little brother

I can't wait for the 12th. That's when my little brother B comes to visit.

I haven't taken any vacations since February, since I missed so much time when I was sick and then while I was recovering, so it will be nice to have a week off.

We talk on the phone sometimes, but most of our conversations are over text.

The other day, we had this exchange:

Me: Do you have a list of things you want to do when you're here?
B: 1. Consume coffee. 2. Mock vegans. (The backstory: I have been following a vegan diet for almost two months. He likes $4 mochas.) 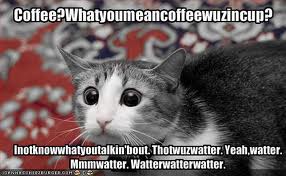 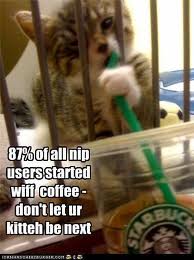