Sorry to be MIA again. Depression sucks, and it's hard to write when you're depressed. I'm sure a lot of writers get that.

We lost two people recently who vastly improved the quality of my life, and, I imagine, countless others. Sheila Michaels single-handedly led the campaign to use an acronym/prefix, Ms., that didn't indicate a woman's marital status. I emailed my dad, who is the first feminist I ever met, her obituary and he replied: "Why haven't I heard of her?"

Like so many others, she was lost to history. I hadn't heard of her, either.

When I was little, I asked my grandmother, "What does 'ms' mean?"
She replied, "That's if you can't decide if you want to be a 'miss' or a 'missus.'" I found that pretty amusing, but then realize now that in her generation, those were the choices. Period, end of story.

Sheila Michaels created a movement nothing short of revolutionary - the idea that a woman had an identity outside of her legalized romantic relationships.

To children's book author Michael Bond I owe much. I read the Paddington Bear books as an adult during a time when my world was so stressful and chaotic that I could only handle reading something light and fluffy - or so I thought. There is a gentle humor in these volumes and a deep emphasis on lasting friendship. And, the idea that you can accidentally flood a house, or cover important papers in marmalade and still be loved is a pretty damn decent one. 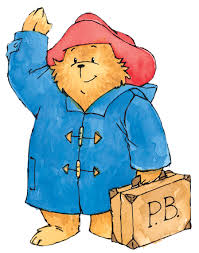 A few months after I started reading those books, I was hospitalized for a week. Paddington - a stuffed one - was the only bit of cheer in my room.

The Paddington books create a safe, happy place, one that we can sometimes only find in our imagination.

Distraction can be a lifesaver. I imagine that isn't just the case for me, but for many others.