Since the grief, triggering and rage that was Monday, learning about the verdict in the Stanford rape case, I've written and re-written this post in my head.
*A ninja edit: I love Joe Biden!*

Like millions of other people, the emotional rollercoaster between those three kept going around and around. And I don't want to be silent about it. Not anymore.

Stanford is in my hometown. The judge that is now up for recall was elected in the county where my family still lives.

In high school, we were warned not to go to Stanford frat parties because we heard girls got raped there. We stayed away. It didn't protect us.

Apparently the law still can't, either.

Even after decades of feminism, of advocacy, of public awareness campaigns, it is being argued that "alcohol and promiscuity" are to blame for a violent crime.

This rape culture existed in my hometown in the 1990s. Some things, apparently, don't change.

More even than the ridiculously light six month sentence are the ludicrous objections to any sentence at all by the rapist, Brock Turner, and his family. His father, it seems, is more interested in whining about him being so "depressed" that he no longer craves his favorite steak, than showing any concern whatsover about the woman he treated like a piece of meat. 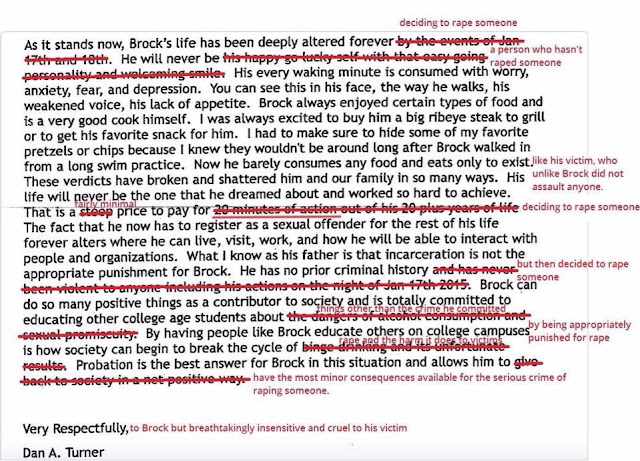 This tells us what we have always heard before: don't tell.

No one will believe you.
Your name will be dragged through the mud.
It isn't worth it.

And our internal voices told us: just blame yourself.
Which is what so many of us have done.

The longer I am involved in advocacy, the more people come to me and disclose that too many of us - far, far to many of us - have been suffering in silence.

Brock Turner's father wrote in a letter to the judge that his son would never be the same. Turner himself complained that he had already lost two jobs because of "this." This, bucko, is the fact that you raped an unconscious woman behind a dumpster. Clearly he thought of her as trash.

Try living with PTSD for 25 years. Try burying things that happened to you when you were 14 because the handful of people you tried to talk to 1. didn't believe you (therapist), 2. couldn't handle it and changed the subject (family), 3. groped you and tried to get it on with you when you just needed a hug (male friend. Yes, really. He's a district attorney in upstate New York now.)

Try living and reliving this in your nightmares and having lifelong trust issues and only recognizing it now.

My boss said he hadn't signed the petition to recall this judge because "it's not here, I can't vote to recall him, so I really can't do anything about it."

I disagreed. I told him what I thought: expressing outrage, protesting, sends a message around the nation and the world that this is fucking unacceptable. That no one should be afraid of coming forward because they're afraid of being humiliated. That rape is never, never the victim's fault. That it is a violent crime that should be punished like any other violent crime.

After the triggers, after the hot, angry tears all through my drive home Monday, I decided that I am not going to be silent anymore, in hopes that other people will believe it should be OK to speak up.

Go buy this book! My friends over at A Beer for the Shower have been kind enough to check in on me throughout all of my symptomatic shit, even though they are busy as fuck with their new release, and so I am sending a big hug towards Colorado. (Did I swear enough in that sentence? I fucking hope so.) 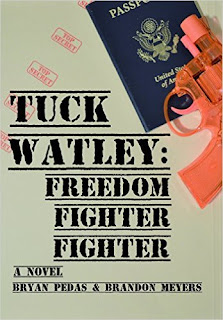 Humor is how I get through the day, and it probably saved my life these past few months. And I don't think I know anyone funnier than these two. So, Marvin K. Mooney, will you please go now? Go buy this e-book and they'll send you a signed copy free of charge, because apparently they don't want to make any money. (Hint: you can always buy the Kindle version and offer to pay them for the hard copy.) At $2.99, it's cheaper than a trip to Starbucks, unless you're one of these people who waltz in there and ask for a venti iced water with light ice. (Yes, I have seen people do this.)

I hadn't planned an extended absence but between getting divorced and my grandmother's cancer, my brain kind of went splat. I'm feeling much more like myself this past week. I found a great therapist who took one look at my intake form and said, "Wow, there's a lot of mental illness in your family, isn't there?"

Fortunately, one of the things I live with is OCD, which, no joke, allows for great organizational skills. It allowed me to pull off an event like this without an assistant, during a week I was debating a trip to the hospital. Seriously, thanks to all of you who have been checking in on me during my time of hermiting and licking my wounds. If you or anyone you know needs help, please reach out. Help is available.
It does get better.
Posted by Riot Kitty at 4:32 PM 18 comments: