Things that drive me nuts on a Monday 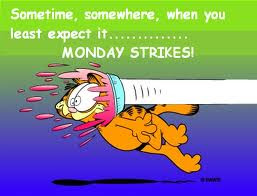 Caller #1 - this was someone who called asking for a call back "ASAP" because it was "really important." A volunteer calls back and this person says: "I need to call you back. I have to make another call."

Um, yeah, we've got time to twiddle our thumbs on the busiest day of the week.

Caller #2, who called four times and e-mailed, equally insistently. He calls again and he says, "I can't talk to you people right now."

Person #3, a volunteer who insists on having our meetings at his exclusive club. Since no one else is a member, he has to sign us in. He does not show up. The four of us squeeze into three chairs in the lobby and huddle to have probably the committee's most fucking efficient meeting ever.

Seriously, WHAT THE FUCK, PEOPLE?!
Posted by Riot Kitty at 10:17 PM

Well Happy Monday to you, my favorite LOL Cat !

You know what ? I can totally sympathize with you. I volunteered with a couple of agencies where we were basically doing people in need serious life-saving favors like trying to stop them from getting deported and a few would still walk all over us and act like they were doing us favors.

I hate it when people do that and have no tolerance or sympathy for it, and I don't care what they've been through because there's always another person around the corner who has it worse and would be grateful for the help.

Okay, sorry for the ranting. Off the soapbox now !

Mondays are strange and horrible creatures.

Ah well, at least it's a week till the next one!

That reminds me of when someone who has Call Waiting on their phone calls me and then puts me on hold because another call is beeping in. I think that is so rude and so I refuse to have that feature on my phone.

No, seriously, I'm so over all the bullshit at work that I can't even read this without advising you to QUIT! lol

(You don't want to listen me, Chica!)

Dontcha just love volunteers who think they're so special because they volunteer and you have to work your schedule to suit their schedule and then they don't even have the decency to be there.

Now you know why the Boomtown Rats recorded "I Don't like Mondays".

But now it's Tuesday so everything is wonderful, right?

Hah! That's what Mondays are all bout, dear Riot! Those idiots had the whole week end's worth of time to plan how to f#&* up your workday on Monday... :D

Okay, this isn't a Monday rant, but rather one that be applied on any day of the week.

Gotta a secretary at the place that I do payroll for.

She will send me an e-mail (marked urgent. For for solid years, all of her e-mails are marked urgent. None are) letting me know that I have revised timesheets being faxed to me.

With me so far?

Still with me so far?

Is your head spinning yet?

S: Don't be sorry! Totally sympathize.
Claire: True!
FB: LMAO!
L: I think call waiting is so rude. Unfortunately my cell phone came with it. I don't use it!
I: LOL!
Joey: Weeeeeeell, something like that. It would be better if it was Friday!
RA: That is a really good point!
G: Unfortunately, I follow because there is a volunteer in another office we work with who is EXACTLY like that and I want to FUCKING THROTTLE HER after every e-mail exchange.

WIGSF: Sorry I missed your comment the first time. Don't know why, because it's SO true!

Anonymous said...
This comment has been removed by a blog administrator.
8:52 PM

Anonymous said...
This comment has been removed by a blog administrator.
8:53 PM


and volunteers all too often feel a sense of entitlement because they "are doing it for free" which somehow, I guess, justifies them acting like total tools...at least, in their own minds...

Just think, you will be retired someday and won't even know when it's Monday.

So, did you guys trash the lobby and charge drinks to his tab?

UGH! What's up with people?!? cats are better. (Too bad I'm deathly allergic to em') Why can't people be more like my Labrador? She acts like I'm the Jonas Brothers, and she's a tween every time I come home!!

Darth: Yeah, we have some like that, unfortunately.
GA: Bwahaha! Someday I'll probably turn into one of the people that others are irritated with and blogging about...
MZ: Ha! Great idea for next time.
Darrin: You are so right. I like my pets much more than most people I meet.

I am so with you RK, I've come across friends - FRIENDS!! who literally 'cut me off' because they are 'busy' :(

mac said...
This comment has been removed by a blog administrator.
6:15 AM

S: I'm sorry. I've had the same thing happen. Those people are not really friends, are they?

You've reminded me here why it is that I like the company of animals so much.
Great post. Thanks.

All the best, Boonsong

建邱勳 said...
This comment has been removed by a blog administrator.
8:12 AM