And just when you thought it couldn't get weirder

Greeting me on my voicemail at work this morning:

"Hey, RK! I just left a message on the general voicemail. Can you come to my house and lick my @*&!^T%%#?" (I'm not a prude, but it was so rude that I can't bring myself to type it out. If you want a hint, go read the lyrics to the 2LiveCrew song that riled the lovers of obscenity laws in the late 1980s.) 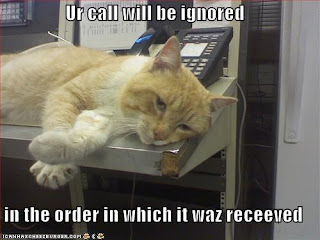 And he only left it on *my* voicemail, along with the general one...seeing as how he called me by my last name, I'm assuming this is a complete stranger. But I resent the fact that he didn't leave a message for either of my colleagues!

"It's because you're female," a colleague at another office told me.

Don't you wish you had that much free time? Is this guy unaware of caller ID? Hmm.

Speaking of unaware (or rather, clueless), who do you think ran into her co-worker's office when he was on a conference call and blurted out, "Hey! Did someone leave you a pornographic message, too?"

Come to think of it, my boss was probably thrown off by that question as well...
Posted by Riot Kitty at 5:29 PM

What a way to start the day!

I love that you blurted that question out on the conference call! You rock, chica! :)

Once there was an obscene comment written about me by a disgruntled client on the men's bathroom wall in our office. My male co-workers wouldn't tell me what it said. It's kind of a rite of passage. Welcome to The Club, girl!

And it is almost always men who leave these gratuitously offensive messages. Sigh.

Wolw - his life must be very lacking in any real action if he has to resort to that!

At least it livened up your day!

I got a phone call like that once at work, when the guy started going on and on about making love to my wife.

I kept agreeing with him and said "Oh really?" a couple of times. Seemed to bother him that I was taking what he was saying so nonchalantly.

And yes, I had a reasonably full head of hair back then.

Firstly, ewwww. Secondly, I too am jealous of people who have time for this!

WD: Yeah, tell me about it.
S: Accidentally :)
D: I totally would have snuck in and read it!
TEC: It would have been much more clever had a woman done it, I'm sure.
RC: I'm pretty certain of that.
Joey: You know I'm no prude, but this even offended *me.*
L: I could use a more boring day!
G: That is hilarious!
C: I'm super jealous. Madly jealous.

At least you started off with something interesting.

I ended a shift with a customer who swore like a sailor over a mistake she made. Not fun.

just be glad it was not a video call....

Working in television I am all too aware of how much time certain people have on their hands.

L: I can only imagine, having worked in newspapers and taken many of those calls.