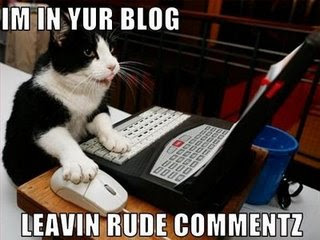 I have some colorful friends (online and offline), and from time to time, one of them will say, "I hope I didn't offend you!"

My friends, it is very difficult to offend me. However, I was thinking about it, so here are the top several things to which I take offense.

1. People who waste my time. This especially includes people who ask you the same question 12 different ways, hoping, each time, for a different answer. On a couple of occasions on the phone at work, I have actually had to say, "You can keep asking this question, but I won't have another answer for you."

2. People who talk on and on and on and on...and on, and then talk louder when you try to cut them off, so you end up literally having to walk away to save your sanity. Why is it that these are the same people who never have anything interesting to say?

4. People who get offended about nudity but think violence is A-OK.

5. People who think they have a monopoly on knowledge. This includes the guy I had never met before who accosted me at the lake last weekend and basically told me Christians shouldn't feel bad about having lots of possessions, "because the Book of Revelations says that the streets in heaven will be paved with gold!"

6. People who look down on other people simply because of how they were born - race, gender, sexual identity, social class, etc.

7. People who whine, snivel, and bitch about things, but don't take any action to change them. Here's 50 cents, call someone who gives a shit!

9. Badly made espresso drinks. You know, from mixes instead of syrups. I'm spending a small fortune on this stuff, I'd rather it not taste like mud. Bad espresso drinks are like bad sex and bad pizza: don't bother.

10. You knew this was coming - people who think it's ok to say "Jesus Christ!" or "Oh my God!" but are offended by the word "fuck." Fuck is a very useful word: expletive, noun, adverb, verb, you name it.

Ha ha I think I inspired a blog post! ;)

Things that offend me?

When people talk about Adoption in a negative way.

AMEN TO ALL OF THEM.

Sadly, I do talk to women's boobs even though I'm a female.

I mean, some people have FREAKY huge ones and I feel like squeezing them and burying my face in their cleavage.

No, I'm not bisexual.

My best friend died of breast cancer when she was 29 and someone came to visit her in the hospital and talked to her about heaven and mentioned the streets paved with gold. She asked why that would be a big draw and I told her she had a point. I'd want them paved with chocolate.

I'm with ya on the bad espresso drink thing. And bad sex and bad pizza. Exactly.

A lot of things offend me, but for the most part, I try not to let it bother me.

However, these three things annoy the shit out of me.

I am a child of the 70's & 80's and thus we were taught to use words in the manner that they were originally meant.

For instance, back in my day the word "gay" meant happy. Still does, so more often than not, I when I use the word, I think of happy, not someone who pursues the alternative lifestyle.

BTW: when did the word "gay" come to mean a male homosexual? Shouldn't it be interchangable among the more enlightened folk of the world?

One more btw: leaving this comment got me to thinking about words whose meaning has changed over the past few decades. Might make an interesting post for me to write about.

I am most offended by persons who call me racist because I did not vote for Obama.

Well, you have a very good list there. I'm with G on over the top political correctness. I remember a time in UK when people were told not to use the word "pet" to refer to cats and dogs as it was demeaning but to refer to them as "animal companions". I really don't think Rex is too worried about that.

As a Christian, I do find it offensive when God and Jesus is used inappropriately. I am not offended by "fuck" but I think it is stilly to use it thinking that it makes someone cool.

Joey: Agreed ;)
LDML: Further proof of my theory that you are really a 30-year-old straight man ;)
L: Seriously, who would say that to a dying person? That's terrible.
G: Sounds like a post!
GA: LOL! As for the second part, are all of those people planning to vote for Herman Cain? :)
LG: Pet companions? Seriously? I don't think saying "fuck" makes me cool, it's just very versatile.

I've been on the internet too long, I rarely get offended by anything anymore... Your list is of people who would just piss me off, not really offend me.

#5, #6, and #10 are my three favorites out of this list. People can really drive you to drink sometimes. OR every day, if you're me.

Okay so if the streets are paved with gold, does that make it more or less difficult to drive on with a vintage '50's automobile I'm sure to have in Heaven?

It's a good thing I'm not a girl, cuz I would talk to my boobs all the time. We would be BFF's.

SRM: Oh, there are numerous other things that piss me off! Maybe I need to spend more time on the internet?
CB: Hahaha! Why do you think I had to quit? ;)
Mike: Yeah, you'd probably be hospitalized ;)

And if you wade through that without being confused...I am offended

I, for one, am highly offended by Darth Weasel's offensiveness. Offended, I tell you!!

Darth: I am confused. And offended!
Mike: I think it has to do with those pictures you keep sending me.

Beautifully written and expressed my dear friend, RK. I just love this post for some reason...well, for many reasons.

I am so, so, SO with you on #7. I do NOT have patience for whiners and people with a victim's spirit.

Guys don't usually talk to my boobs, but when it happened a couple of times, I'd talk back to their crotch (not that they cared or that it stopped them from talking to my boobs...but it made ME feel better).

Have a good night, chica! This post hit the spot. :)

What offends me the most are those who make rude comments like: "that's so gay", or the use of the F word, and I'm not talking about fuck. Seriously, how is it that people get by with that but if they are not black and use the N word, they'll get decked and possibly fired if it is spoken in the work environment?

I'm offended by people who won't use the word goddammit but will say things like goshdarnit. A word, in essence, doesn't mean anything. It's an intention. And the intentions of both of those words are the exact same, so why does it matter which one you say? Do they think that God's listening, and he's just dumb enough to be tricked by this? "Hey, did little Suzie say goddammit? Oh, no, she said goshdarnit, which is completely different. Nevermind."

Ily: Glad to hear it, chica! I'll have to try the talking to crotch thing...
PM: I don't get it. But then if that happened anywhere in the metro area where I live, I'm pretty sure someone would get fired. Very little tolerance for that here, luckily.
ABFTS: Thank you! That is so annoying.

With me, it's people who say things they don't mean, or don't mean to follow up on, or say for the sake of saying.

Political correctness really pisses me off !!

Also, you know what they say about bad sex and bad pizza....... Even when it's bad, it's actually still pretty good !

Anil: I hate that, too.
S: Heh. I have always disagreed w/that mantra! Bad sex and bad pizza...just not worth it.