Overheard at dinner at a Thai restaurant last night:

Customer, upon sending her dish back to the kitchen: "This isn't objectionable, but it's just incredibly uninteresting. Can't you get me some green beans, and some snow peas?" 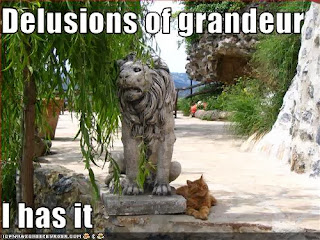 Mind you, the ingredients in every dish are listed on the menu. Which presumably she read before she ordered.

And speaking of fun, is it me? Or does this sound a bit ridiculous:

My coworker took today off to chaperone his son's school field trip to - get this - watch salmon spawn.

I kid you not.

My boss, who generally only gets enthusiastic about football, was talking about how cool it was.

Seriously. Fish. Fish who reproduce and then, in a cruel joke of the universe, croak off.

Me: "So...they're fish. What happens? What do you do? You just watch them spawn?"

Boss: "If you're from the Northwest, it's a big deal." He said this with a straight face!

Translation: If you're from the Northwest, you are pretty easily fucking impressed? 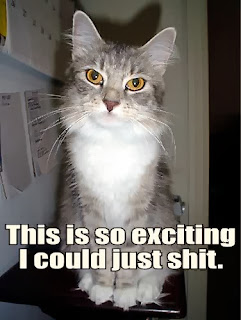 Me: "So watch them and be happy the same thing doesn't happen to humans afterwards."

But what do I know? As we found out at dinner, interesting is relative.

And the big joke of the day is that our state's insurance exchange, was supposed to open today, isn't opening at all, but instead of admitting this, they're saying (I kid you not) that "the shopping experience is only partially available."

Excuse me, but if I can't "shop" and actually buy anything, I think that pretty much translates to the shop being closed, don't you? I am so sick of marketingspeak. But maybe I'm just not thinking out of the box. Maybe I need to think more strategically and run with it for the maximum optimization.

You never know, the ideation could go viral.

What does "partially available mean"?

Am I just partially here responding...or am I responding completely.

How can a store be only partially available for shopping...just for window shopping...perhaps!

I agree with Mr. RC about that diner at the Thai restaurant; you wouldn't want to be stranded on a deserted tropical island with someone like that! She probably hates coconuts, too! ;)

I am not certain that my list of 'exciting vegetables' would start with green beans and snow peas. I like them both, but perhaps I am more blase that the diner, because I wouldn't get excited about either of them. Or both of them.
Watching fish spawn sounds suspiciously to me like a watered down combination porn/snuff movie. But then I am not from the North-West.

partially available (for shopping)? we see this type of marketing speak over and over in press releases, and it just drives me crazy!

i am with mr rk about that woman at the thai restaurant.

have a great wednesday!
big hugs

I would hate dining out with that woman. :) I used to work with a woman like that who used to talk about how she sent her food back all the time. Once she said her steak tasted like it had Comet cleanser on it the third time it came back - I thought, "Because it probably did."

Gads! Bringing back all those awful memories of owning a restaurant.

"But it's in the menu name and description."

How many years do you have to live in Oregon before spawning salmon becomes interesting? I'm guess the over/under is 50 years.

LOL! I went to see the salmon spawn when I was a kid. I have a picture to prove it. My kids went with their classes at school. And then my parents took the. (More pictures.) I would not say it is exciting but it is definitely a Pacific Northwest kind of thing.

Futurama did a whole thing about salmon spawning. The female shits out her eggs and it kills her. The male, seeing this, whacks off on the eggs then dies too. They don't even fuck first. That's no way to live. I say let them go extinct.

I've been on two field trips for fish. We caught trout and they died. Morbid now that I think about it.

I hate people that send food back for "weak" reasons. But that is a really funny point about "interesting" being relative. I think salmon spawning would be on the same level as people watching other people pretend to be statues. Just standing there watching people not move. (I don't get it)

Hahaha ...So watch them and be happy the same thing doesn't happen to humans afterwards."

I didn't try to get back on the Marketplace yet because I don't want to ruin another day. I am pacing myself. I love your line about "doesn't that mean the store is closed?" You are too funny RK.

"This isn't objectionable, but it's just incredibly uninteresting."

I think it be interesting to watch.

I mean, the fist die afterwards right? Then they float bell-up and I can snatch them up and eat as much fish as I want.

That last Cat picture is the best laugh I've had in weeks!!! LOL,LOL, LOL....I'm still laughing! THANK YOU SOOOOO MUCH, My Dear, I really needed that....!

I bet that dish was much more interesting when it came back covered in spit!

Also, once upon a time ago I might not have understood why people watched salmon spawn. That was until I went white water rafting this summer. There's seriously a particular cluster of rocks where the entire (tiny) town will gather on an afternoon just to watch the amateur rafters dump their raft. There were 20-30 yokels watching us in lawn chairs when I reached that point, and yes, they were very disappointed when I didn't flop over.

Lee: She probably does hate cocoanuts. Being stuck with her would be justifiable homicide, as far as I'm concerned.
EC: LOL! I'll make sure to tell that to my coworker. And I was dying to look at the veggies she said were "uninteresting."
Betty: Agreed. Press releases do not interesting writing make ;)
Lynn: Brilliant! I totally would have said that out loud, had I thought of it.
Charles: Yep.
Dexter: I don't know how you were in that line of work without going to prison. How long? I think they're basically both just boring people.
Birdie: HOW do you do that?!
WIGSF: I know! Sad, sad state of affairs.
Abby: They didn't even get to catch the fish on this trip.
Cheryl: I don't get it either! That was the only thing I could think of to say.
Joey: Very funny! I HOPE you are joking. :)
DW: So, sushi!
Naomi: I'm glad!!
ABFTS: Yeah, exactly. That's actually what I said to Mr. RK: "If I were in the kitchen, I'd spit in her food." So that bunch would probably enjoy spawning.

My mother always insisted that there be color in the meal. She would never have sent food back in a restaurant but she would have been sad to have to look at a bland, colorless dish.

I must admit that I could go and watch Salmon spawn. What does that say about me?

Now when I think of Salmon spawning, I also think of lots of bears having a feast! That would make the trip MUCH more interesting, and increase the need for chaperones a fair bit too!

"Come on, children, no need to run - you only need to be faster than Mr Westlake..."

yep, i also linked to you today!
i'll be back to comment properly;)

salmon spawning..i've read that after spawning they generally die within a week, fertilizing the stream and creating a nutrient-rich environment for the baby salmon that are about to hatch. interesting-isn't it?

have a great week ahead~
big hugs!

Betty Manousos said...
This comment has been removed by the author.
9:29 AM