Could this movie be made today?

We watched Goldfinger last night. I hadn't seen it since I was in elementary school and ignoring the obvious sexist crap (like Sean Connery slapping his blond masseuse on the ass and saying, "Bye. Man talk" when his spy boss comes around, it was pretty amusing.

So was the fact that Goldfinger changed accents a few times - we were told he was British, "but doesn't sound like it." He sounded German, then Indian, then a little bit of American and a bit of British, depending on the scene. WTF?! Mr. RK looked up the trivia, and apparently the actor didn't speak English at all, so it was all dubbed (badly dubbed.)

What made me laugh over and over (you would too) was the character played by Honor Blackman, "Pussy Galore." When I was in high school in the 90s, we mused about whether modern cinema could get away with that, and a friend said, "I think her character had lots of cats." 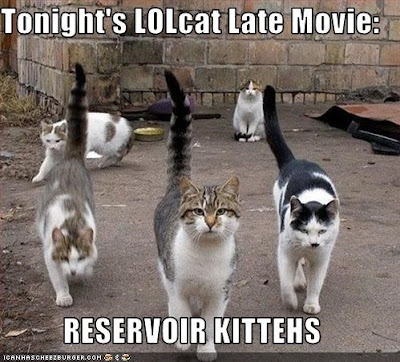 Guess what? No cats! (You super James Bond fans can bear with me here, I haven't memorized the entire catalogue.) On top of that, her troupe of pilots was called "Pussy Galore's Flying Circus." I kept imagining what fun Monty Python could have had with that one.

So despite the fact that there was no nudity and the worst kind of violence was when someone fell over after a gun went, "Bang!", John Wayne-style,  I'm guessing the ratings people wouldn't let us have so much Pussy if that film were released today.

Mind you, Mr. RK and my brother B went to see Trance this afternoon, and I am told that Rosario Dawson leaves nothing to your imagination (that includes a razor and sex with two characters.) Plus one of the characters gets his fingernails yanked, and another gets shot in his boy bits.

So sexual innuendo in a funny way is taboo, but blatant violence and nasty sex is OK for the MPA?

Call me a wuss, but I'm leaning more toward the action movies of 1964. Or Austin Powers.
Posted by Riot Kitty at 3:27 PM

I just woke up from a nap and I was thinking of Goldmember when you said Goldfinger! This post made no sense and I was racking my brain trying to remember Sean Connery in Goldmember.

I think Goldfinger was the only James Bond movie I ever saw. Did it have the character Odd Job? I think I was expecting many cats too.

The only name more stupidly outrageous than "Pussy Galore" was "Octopussy." *facepalm*

And dear old Pussy Galore and Octopussy are both much, much better (and more fun) than gratuitous and explicit violence. I really don't understand how sex is considered more dangerous for young eyes and minds than gore. But it is over here as well. Sigh.

And I would like to see Resevoir Kitteh - but couldn't come at the original.

Of course Goldfinger could be made today. It's called Mad Men.

Pussy Galore is one of the all time best movie character names. :) I love the old Bond films (but they are a bit sexist, for sure.)

For decades, people would get on the MPAA for applying a double standard for movies.

A movie could have scads of violence and bloodshed, and get a rating no worse than R.

But depending on what kind of sex was shown (acceptabe was boobs and female ass. everything else, male or female was not), the movie would get an R rating or X (old time), NC-17 (new time) or unrated (old or new, kiss of death for a major movie release).

Sorry I haven;t been visiting RK....Sending some love and cheers :) MUACK !!

That is a really interesting post. I went to see Goldfinger as a teenager (well just, I was 13) but don't remember if there was any brouhaha surrounding the Pussy Galore reference. That was before movies were rated so I guess no one was concerned with warping our young minds.

You might of already read the reference about the censorship of Pussy Galore in Wikipedia. I thought it was funny. I copy and pasted this from Wikipedia.

"... the producers thought about changing the character's name to "Kitty Galore", but they and Hamilton decided "if you were a ten-year old boy and knew what the name meant, you weren't a ten-year old boy, you were a dirty little bitch. The American censor was concerned, but we got round that by inviting him and his wife out to dinner and [told him] we were big supporters of the Republican Party."

The names seem pretty quaint today to me. innuendo.

I am among what I am sure are the very few Anglophiles on the face of this earth who have never seen a James Bond movie (Austin Powers is the closest I've ever come) but even I was amazed that they ever got away with the name "Pussy Galore". The MPAA is a corrupt bunch of old guys who will rate a movie in favor of whoever greases their palms the most; Matt Stone and Trey Parker actually gave an interesting interview on what it was like to deal with them. That being said, I can deal with violence in movies (aka Reservoir Kittehs) moreso than I can with graphic sex. But maybe I'm just a prude...a violent prude...

In a strange and depressing way...That was such a much more innocent time. (I CHOOSE THAT!!!)
Today's films are so filled with horrific violence--And very little Humor---(Pussy Galore was meant to be funny, and it was!!!)
Deliver me from the rampant in-human violence of today. And the rather violent sex in films, too...OY!!!!

Birdie: That is hilarious!
GA: Yes! And as you now know, he has a wikipedia page.
Debra: Good point ;)
EC: Go figure! I don't get it. I hated Reservoir Dogs, too violent.
WIGSF: Haha!
Lynn: I agree.
GB: I hate the MPAA.
S: No problem! Back at you ;)
Cheryl: That is fantastic trivia!!
CG: I know, right?
Kathleen: A corrupt bunch of old guys, well said!
Naomi: I'm with you.

Yeah... The rating systems make no sense and trust me, they're even more absurd for video games.

DW: I can only imagine.

On a similar note, when in Malta we went past the set where the movie Popeye was filmed. I started thinking about that movie and the older cartoons. I think it is in the film where Olive Oil is having to marry Bluto because he told her she is. No debate. She doesn't get to refuse or even have time to think about it!

I'll admit, the only Bond movie I've ever seen is the most recent one with Daniel Craig.

I am, however, a big fan of the show Archer, which I think conveys Bond to a T. He's portrayed as a drunk, sexist womanizer who's lazy because his job comes to him so easily... which... isn't that exactly what James Bond is?

Agree with the ridiculous ratings system of sex versus violence.

I first saw Goldfinger probably in the 70s when I was 12 to 13 or so. I remember thinking, "Gosh, I wonder if adults really know what Pussy Galore means?"

Yeah, I didn't quite have the world figured out yet.

Dexter: Thanks for stopping by, I totally laughed out loud when I read that!

yet another reason I orefer movies like Megamind, Despicable Me, How to Train your Dragon, the lorax...