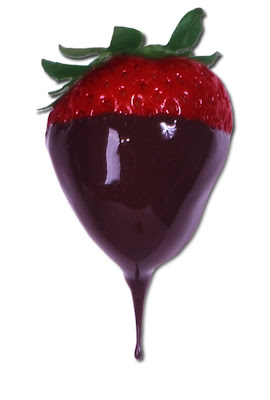 Follow up from the blog awhile back about this awesome chocolate cafe being ruined by corporate greed - I went to the Moonstruck cafe today to pick up some chocolate for an upcoming family trip (sorry to spoil the surprise, guys!) and - guess what? Almost ALL of the old desserts (chocolate pyramid, built-like-a-brick brownie, peanut butter cheesecake, etc.) were back! The skimpy ones that cost twice as much were gone!

The barista said there were literally at least half a dozen people coming in every day asking for the corporate contact info. to complain. (The million dollar question: how many of those were fueled by rampant PMS made worse by the deprivation of our favorite dessert fixes? Inquiring minds want to know!)

The original move was made to save money because Moonstruck had expanded into other, non-Oregon locations and wanted to pay for it. Well, pay they did - they closed those locations to focus on (duh!) their local stores.

So the moral of the story is...if you complain enough about the $6 desserts that you're missing, they'll come back :)
Posted by Riot Kitty at 1:01 PM

mmm....chocolate. do you hear that? it is either one of the voices in my head or else chocolate calling my name. when you get back from Cali perhaps we can head over there.

This is wonderful and like you, I will write and give my constructive feedback too. Glad it is back and I can imagine being in dessert haven with you now :D

Juicy Strawberries dipped in Chocolate..
You are so cruel!!

nice. I LOVE Moonstruck! My mom who lives in Oregon sends it to me for xmas. I eat it too quickly though. best milk chocolate bars EVER!!!!