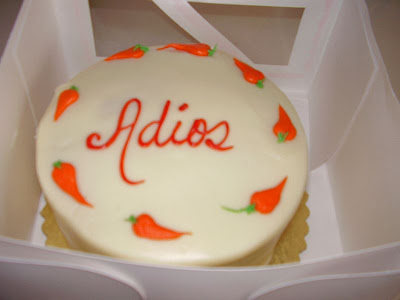 Originally I was going to post today about a certain person's invited resignation from my office, which became official today. That's why I got this cake.

But then I read today's version of my hometown newspaper and saw a high school classmate's memorial service notice.

Is it legitimate to be sad about losing someone you weren't especially close to? Are we still entitled to feel loss?

DH, as I will call him, was actually the adopted brother of a girl in my class who was kind of stuck-up. He had Williams Syndrome, a rare genetic condition which causes developmental and medical illness. He was 35 when he died last week.

Oddly enough, one of the typical traits of individuals with Williams Syndrome is that they are very, very outgoing - and DH was no exception.

I met him in the Special Friendship Club in high school. It paired students with buddies in special education classes. There were group events sometimes - I ended up dropping out because I thought I was too busy with other stuff - but mainly it was a way to meet people and make friends.

I was shocked when a couple of guys I took for asshole jocks came to the club. It was like they became totally different people when they stepped in that room, or when they greeted one of their buddies in the hallway.

DH would always break into a big grin, not self-conscious about his braces, and say, "Heeeeeeeeeeeeey! How's it going?" And he'd give you a big hug. He'd wave to you from across campus, always smiling.

I don't think he ever had a bad day. He came to all of the school dances, and hit the floor with gusto. He always had more dance partners than anyone else. Being around him, it was impossible to feel self-conscious about anything.

DH wasn't a particularly close friend of mine, for the simple reason that everyone was his friend. I didn't keep in touch with him, or anyone else from my high school, when I moved across the country, went to college, and grappled with the next, adult, free (so I thought) phase of my life. But knowing he is gone is literally like a bright spot going out, a stillness created, a silence where there was laughter before.

I thought about him recently, for no reason. I wondered what he was up to. And I would say "rest in peace," but knowing DH, that would be far too boring. I'm sure he's resting in happy.
Posted by Riot Kitty at 6:19 PM

You almost made me cry. I know what it's like to lose someone whose light shown (shined?) on lots of people. When a person like that is lost, the world does seem a little darker, doesn't it?

I think as we get older, we feel closer to people we knew in our youth.
Being sad shows your empathy Kitty..

I'm so sorry about your classmate. Even though we may not keep in touch with those people, you still care about them and think fondly of them. I hope he's resting in Happy too :)
On a happier note, congrats on getting rid of the pesky coworker ;)